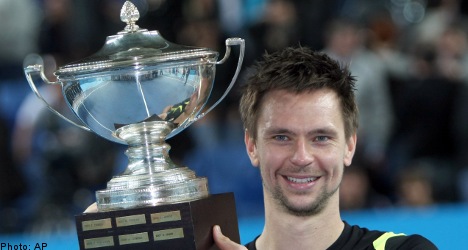 “I’m very proud to have started to play better in the second set instead of starting to play worse after losing the tie-break.”

He added: “Winning three tournaments in less than two months is a very nice

feeling, it’s the best start to a season possible,” he said.

The Swede, who adds the title to previous wins in Brisbane and Rotterdam on the ATP circuit so far this year, paid tribute to his opponent.

“He played very well and he was really impressive in the first set. He was very aggressive and played really quickly.

Cilic said he would try to take the positives from his run to the final.

“I had a great week. It’s a big relief for me to have got to the final and to have played good tennis,” said Cilic, the world number 28.

“I hadn’t had this opportunity for nearly a year. I’d played well but it’s one thing to play well for one set against a top-10 player — you have to keep concentrated throughout.”

As in the semi-finals, 22-year-old Cilic made a storming start and broke his opponent’s serve in the opening game.

On the other side of the net, Söderling was struggling to find the right length with his groundstrokes and committing more unforced errors than usual.

The Swede nonetheless managed to break back, but he was undone in an extremely tense first set tie-break, which Cilic edged 10/8.

In the second set it was Soderling who began more aggressively, breaking Cilic at 1-1 and then producing a love service game to go 3-1 up.

Cilic battled back, levelling the set at 3-3, before Soderling raised his game again, notably producing some devastating passing shots as he took the set to square the match.

The deciding set was a game of nerves, with the players inseparable until Cilic conceded his serve and Soderling seized the opportunity to establish a 5-2 lead before closing out victory.

Söderling, who has now won nine career titles, has won more matches this year than anyone else on the men’s tour — 17 — and has been beaten just once.