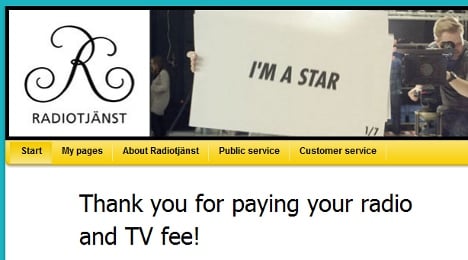 “Technological developments make connecting the charge to an appliance, which is how it is done today, irrelevant” said Social Democrat Berit Högman, chair of the parliament’s culture committee to official parliament newspaper, Riksdag & Departement.

Under the current system, anyone with a television receiver are required by law to pay a radio and TV charge. The fee, which for 2011 is 2,076 kronor ($320), is collected and enforced by Radiotjänst, which is part of Swedish public service broadcasting.

Radiotjänst collects some 7 billion kronor per annum which is used to part-finance Sveriges Television, Sveriges Radio and Utbildningsradio (UR).

The TV licence system does not take into account when, if or how viewers use any of the channels or services which are funded by it.

Despite the fee being paid by nine of ten Swedes, it has become controversial with some questioning why they should pay for something they don’t use.

The issue became a political controversy following the election of the Alliance government in 2006 when it was found that several leading members of the Moderate Party had not paid their licence fee, including the then culture minister Cecilia Stegö Chilò.

The development of web-TV services and the changing habits of viewers has further generated discussion over how the system is designed and Sweden’s parliament, the Riksdag, has now indicated that the issue is to be debated.

“We have to begin the process to see how we can finance public service in the future,” Andreas Carlson of the Christian Democrats told the newspaper.

Among the alternatives regularly touted for financing the system is to find the money from the general taxation system, but this alternative was rejected by an inquiry published in 2008.

Critics argue that a direct tax funding would undermine the independence of public service broadcasting.

Other alternatives under consideration are reported to be a separate tax levy along the lines of the burial charge collected on annual taxes.