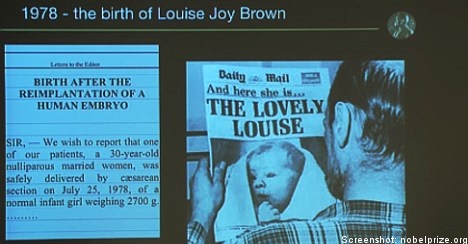 The material, which included evaluations of possible candidates, including IVF pioneer Robert Edwards, who won the 2010 Nobel Medicine Prize, was stolen from the committee member’s car.

Among the missing documents are five books and a computer.

According to Göran K. Hansson, the committee’s secretary, the material was stolen when the car was broken into last year, the Dagens Medicin newspaper reports.

The material had been temporarily left in the car by committee chair Klas Kärre.

The car was parked on Blasieholmen, a peninsula in central Stockholm, at the time of the theft.

“The thief broke into the car, found the briefcase and stole it,” he told the AFP news agency, adding he could divulge that Edwards’ name “was mentioned in the

documents,” since “now we know of course that it was Robert Edwards who got the Nobel Prize last year.”

award to the 85-year-old Briton known as “the father of the test tube baby”, since “we cannot let this kind of actions influence our decisions,” Hansson said.

The documents, which provided evaluations of several candidates, did not spell out clearly that Edwards would be the winner. They were stolen in the spring and the final decision was not taken until the first Monday of October.

“It’s very, very stupid to leave valuables in the car. Everyone should know that by now,” Cecilie Nergaard of the Stockholm police told Dagens Medicin.

Hansson regrets what happened, but points out that the information dealt with last year’s Nobel Prize winners.

“I hope and believe that both the public and the research community understand that it’s not possible to protect oneself against crime in every situation. Our committee members must be able to take material home,” he told the newspaper.

The lead up to the awarding of the 2010 Nobel Prize in medicine had another odd twist in that the name of the winner, British researcher Robert Edwards, was leaked ahead of the announcement.

The Svenska Dagbladet (SvD) newspaper published an article the morning before the Nobel Committee’s announcement, something considered to be a unique event in the history of the Nobel Prize.

The press conference following the official announcement of Edwards as the winner focused mainly on how SvD had received the news.

But the committee denied at the time that someone could have leaked the information to the newspaper.