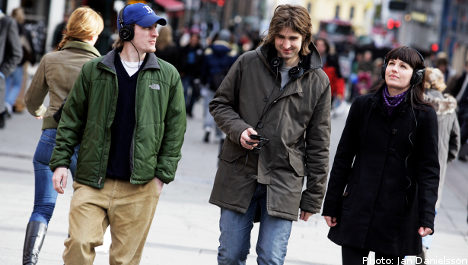 The new service, which has been named WiMP, opens to Swedish users on March 3rd and is already available to customers of mobile telecoms firm Telenor.

“WiMP offers an editorial profile, guiding users to millions of songs. Our country editors will select material relevant for each market to help users to cope with the amount of music that a music streaming service can offer,” said Kristin Castillo Eldnes at Aspiro to The Local on Thursday.

“We think it is more important to take about the relevance, than how many millions of songs are in the catalogue,” Eldnes added.

It is this strong editorial profile which WiMP hopes will enable it to compete with the likes of Spotify, the pioneering Swedish music service which is soon to add the US to its growing list of markets.

WiMP will be priced at 99 kronor ($15) per month, the same as Spotify but without the free advertising funded option.

“By being a pure payment service, WiMP contributes financially to artists, record labels and rights holders and helps to create a sustainable music industry. This ensures that WiMP’s music catalogue will always be extensive and deep,” the firm wrote in a statement.

WiMP was launched in Norway, Denmark and Portugal during 2010, and the firm plans to expand the service beyond Sweden during the remainder of 2011.

“We have said that we will definitely open in more countries during 2011, but we don’t know which yet,” Kristin Castillo Eldnes said.

The Swedish company, which last week announced it was cutting almost six percent of its workforce to reduce costs, posted a net loss of 430 million euros ($465 million) for the year.

Analysts had forecast a loss of 441 million euros, according to Factset.

Revenue for the full-year also slightly beat forecasts, coming in at 11.7 billion euros or a rise of 21 percent from a year earlier.

The number of paying subscribers climbed by 14 percent to 205 million, beating analysts’ expectations of 202 million, which the group attributed to strong growth in all regions, especially in Latin America.

It is the first time Spotify has surpassed 200 million paying subscribers.

Among other things, the company said it had benefited from promotional campaigns, a strong holiday season, and robust growth among Gen Z users.

The total number of monthly users, including subscribers using the free version, totalled 489 million at the end of the year and should hit the 500 million mark in 2023, Spotify said.

The platform, based in Stockholm but listed in New York, has only occasionally posted a quarterly profit since its launch.

It has regularly posted annual losses, despite strong subscriber growth and having had a headstart on its rivals such as Apple Music and Amazon Music.

Spotify founder and chief executive Daniel Ek last week announced the group was cutting around 600 jobs, out of around 10,000, following other similar moves by tech industry giants.