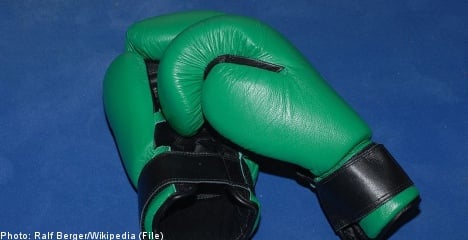 Gray-haired and requiring the use of a rollator to get around, Rolf Klasson certainly didn’t give the impression that he would put up a fight when two young men approached him on Tuesday in central Lidköping.

Klasson was about to take out money from a cash machine when one of the hoodlums demanded the elderly gentlemen give up his wallet, while the other brandished a knife, the local Nya-Lidköpings Tidning (NLT) reported.

What Klasson’s attackers didn’t know was that their seemingly helpless victim was a retired professional boxer who had once been a sparring partner for Bo ‘Bosse’ Högberg, who held the European light-middleweight boxing title in 1966.

“I said to them, ‘this isn’t going to go well’,” he told the Expressen newspaper.

But the two young men simply scoffed at the old man’s warning, something they would soon regret.

Before the pair of cocky thugs knew what had happened, Klasson knocked the knife-wielding thief to the ground with a right hook.

“Then I laid out the other with a left jab,” he told Expressen.

Both men fled the scene, still in shock at having been decked by a man who was likely more than twice their age and required assistance to get around town.

Margita Johansson of the Lidköping police praised the former boxer for his efforts.

“It was well done. One does have the right to defend oneself,” she told NLT.

For his part, Klasson summed up the incident thusly:

“They came after the wrong guy,” he told Expressen.