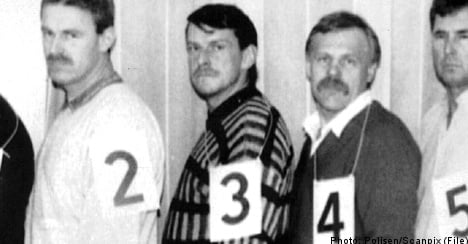 Christer Pettersson (number 3) in a police line up

Two pivotal events marked in the life of Christer Pettersson, still the only man ever tried for the murder.

The first was an accident resulting in a head injury from which he never really recovered and which seemed to set Pettersson on the road to a life of drug abuse and petty crime.

Things deteriorated further when, in 1970, he was found guilty of manslaughter following the apparent motiveless killing of a man on the streets of Stockholm.

The night of February 28, 1986 marked another occasion, however, which would forever chance the course of Pettersson’s life.

Accused of firing the shots which killed Sweden’s former prime minister, and identified in a lin-up by Palme’s widow Lisbet, Pettersson subsequently admitted the crime and received a life sentence in 1988.

However, the conviction was dramatically reversed on appeal the following year.

Pettersson withdrew his initial confession and the sentence was overturned due to a lack of evidence, including most crucially the murder weapon.

He remained in the public eye, however, and continued to pop up in the press and on TV regularly till his death in 2004 at the Karolinska University Hospital which, tellingly was also shrouded in mystery.

Pettersson slipped into a coma on September 16 and died 13 days later after apparently falling and suffering a cerebral haemorrhage.