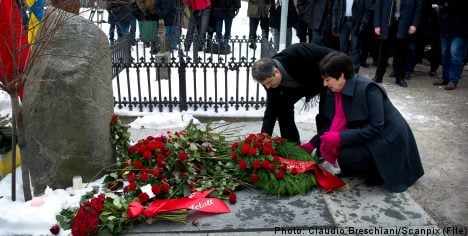 “It’s hard to put words to how I feel. I am so sad,” Social Democrat leader Mona Sahlin told reporters after carefully laying a large wreath of red roses — the symbol of their party — on the snow-covered ground in front of a simple granite tombstone bearing only Palme’s signature.

“He was big. He was Sweden. He was our voice,” she said, standing in the Adolf Fredrik church cemetery in central Stockholm, where around 100 people had gathered, lighting candles and laying down roses.

“I feel sad because 25 years have passed when he could have been here, participated, debated and inspired,” she added.

Shortly after leaving a downtown cinema in Stockholm to walk home with his wife Lisbet on the evening of February 28, 1986, Palme was shot twice in the back by a lone gunman. Lisbeth was also grazed by a bullet.

The attacker ran off, taking his .357 Magnum revolver with him and leaving Palme in a pool of blood on the snow-covered sidewalk at the corner of what has since been renamed Olof Palme street. The gun has never been recovered.

The murder, which sent shockwaves through Sweden, has never been solved despite hundreds of thousands of leads over two and a half decades.

In an interview with Sveriges Radio (SR) broadcast on Monday, Palme’s widow said she is certain she had identified the murderer for police.

However, she didn’t want to discuss any specific memories from that fateful night, or answer any specific questions about the identity of the killer.

In her mind, she’s already said all that needs to be said about the death of her husband.

But when it came to Palme’s politics, Lisbet praised her husband’s work for world peace and child education.

She is convinced that if Palme were alive today, he would be engaged in refugee issues.

The case had been set to be filed away for good Monday, but Sweden last year scrapped its 25-year statute of limitations on murder, and the investigation continues.

On Monday at the scene of the killing, on the busy Sveavägen in central Stockholm, passers-by placed red roses on a bronze plaque in the ground marking the spot where Palme fell.

“It felt important to come here today. This is where our innocence was lost,” Ingrid Landvall, 66, told AFP, recalling how she and her daughter had unsuspectingly exited the underground train station right across from the scene a few hours after the murder.

“There was still a lot of blood on the ground, and some police tape… Everyone was in shock,” she said.

“This is still an open wound in Sweden,” she said, adding “whenever I pass this spot, I look up the stairs (where the murderer was last seen fleeing on foot) and think: ‘that is where the answers disappeared’.”

A few steps away, amid the flowers and candles in the Adolf Fredrik cemetery, Lea Skonberg, 50, described Palme as “the best politician we ever had.”

“It’s heart-breaking that this case has never been solved,” she said.