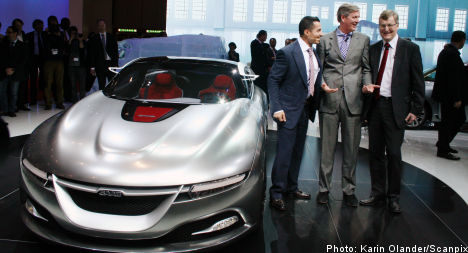 A sleek, futuristic sports car with butterfly doors emerged when Managing Director Jan Åke Jonsson, Chairman of the Board Victor Muller, and Chief Designer Jason Castriota pulled back the veil today at the one of the world’s most important auto shows.

“Here we have taken many new twists,” said Jonsson, modestly, as he stood in the crowd after the press conference.

The PhoeniX’s ‘aeromotional’ design theme is inspired by Saab’s aviation roots and draws expression from Ursaab, the prototype designed by aircraft engineers that spawned Saab’s first generation of cars.

The new concept car showcases Saab’s ideas for its future.

Much of the technology, such as the electric wheel drive, will appear in the new 9-3, which hits the market next October. However, some elements, like the butterfly wing doors, will remain as concept only.

“Customers are buying a brand that they want to associate with themselves ,” he told the TT news agency.

Behind the podium stood Russian financier Vladimir Antonov. Antonov will take over Spyker sports car and wants to own Saab.

Meanwhile, back at home, sales of Saab’s 9-5 aren’t as slick.

In fact, the car company sold more of its 13-year-old 9-5 model during February of last year than what the new model has sold this year.

In February, Saab rolled out 707 new vehicles in Sweden, which is 35 percent more than last year’s bleak February.

But Jonsson thinks the numbers are fine.

then those numbers show registrations in February so that means those cars were ordered in December and January. During February we have seen new orders increase dramatically,” he told TT.

Last autumn Jonsson announced a second shift would be needed by year end at the factory in Trollhattan.

But now he would say when this additional shift would start.

“I have to get back to you on that,” Jonsson told TT.

Both he and Victor Muller point out that Saab has managed to cut costs so much that it has allowed the company to do more than what was originally laid out in the business plan.

“The business plan is a living document, ” Jonsson said to TT.

At the Geneva Motor Show, Saab introduced three new cars, including the new PhoeniX concept car, a jubileum cabriolet and a refreshed green 9-3.