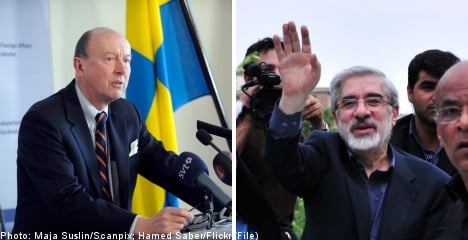 Ambassador Rasoul Eslami “was called in to the foreign ministry today. Sweden wanted to present him with its objections to the arrest of two opposition leaders in Iran,” foreign ministry spokesman Sven Kullberg told AFP.

“The ambassador did not provide any satisfactory answers during this meeting with the cabinet secretary (Frank Belfrage), so Sweden will follow up this issue very closely,” he added.

Belfrage himself told the TT news agency after the meeting that “we are very concerned about developments of the human rights situation in Iran”.

Family members of the two opposition leaders have said on their websites that Mousavi, Karroubi and their wives had been transferred to Tehran’s Heshmatiyeh jail from their residences in the Iranian capital.

Iran however denies they have been detained with Tehran prosecutor Abbas Jafari Dolatabadi insisting Wednesday the two men were still “in their homes”.

The families meanwhile indicated no one was at the men’s homes, which they said had been left in the dark, or appeared to be vacant.

Mousavi and Karroubi, who lost to hardliner Mahmoud Ahmadinejad in the 2009 presidential election, strongly oppose his government and have since guided a string of protests against his rule.

On February 14, the two had sought to stage a rally in support of Arab uprisings, but their supporters quickly turned it into the first anti-government demonstration in a year.

Similar protests, but in scattered forms, were also carried out on February 20 and again on Tuesday, although these were largely quelled by a massive presence of security forces.

The latest demonstrations have infuriated regime-backers, with lawmakers even demanding Mousavi and Karroubi be hanged, while officials moving in to completely isolate them.