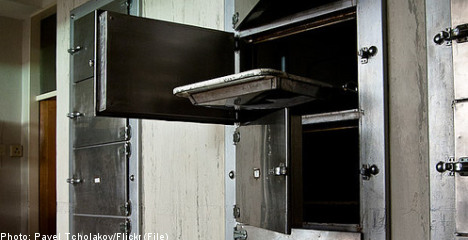 The 48-year-old man’s coffin arrived at the crematorium in Råcksta in northern Stockholm in early January, the Aftonbladet newspaper reported.

But when staff members went to retrieve the body last week to have it cremated, the man’s casket was nowhere to be found.

An initial internal investigation by the crematorium included a review of surveillance camera footage, but failed to turn up any clues as to what happened to the missing coffin.

A record-keeping mistake or the possibility that the casket may have been switched with another are two possible explanations which have also been ruled out.

The cemetery administration has now reported itself to police in hopes that law enforcement investigators may be able to shed light on the mystery.

Larsson has also alerted other funeral homes and cemeteries in Stockholm to be on the lookout for the missing coffin.

Sweden has among the longest waiting periods in the world from death to burial, according to figures from newspaper Fonus Nyheter published in 2010.

On average, 23 days elapses before a funeral ceremony takes place for the dead in Sweden.

In the Stockholm area, however, it takes an average of 30 days before bodies reach their final resting place.

And for the 80 percent of Swedes who are cremated, it takes an average of another 64 days before they are buried.