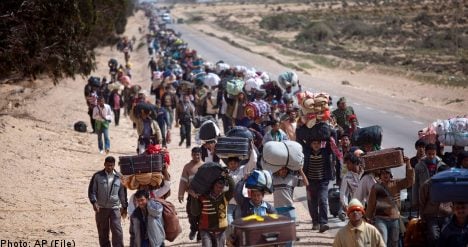 “The mission is to contribute to the evacuation of persons in distress at the Tunisian border,” the foreign ministry said in a statement.

The Swedish military plane is currently in Malta where it landed after evacuating Swedish citizens from Libya.

Sweden said it was offering an extra 33 million kronor following appeals from aid organisations in the region, and that funds could go to the International Red Cross, the United Nations refugee agency and the United Nations’ children fund.

“Developments in Libya have resulted in a humanitarian crisis affecting hundreds of thousands of people,” Sweden’s Minister for International Development Cooperation, Gunilla Carlsson, said in a statment.

“Many people have tried to escape the regime’s violence against the civilian population, and this has created a critical situation at the borders, particularly in Tunisia, which may have a destabilising effect in the region. I am pleased that Sweden can provide concrete assistance to those affected.”

Fleeing the unrest in Libya, growing numbers of people have fled over the northwestern border into Tunisia, including Egyptians now stuck in refugee camps with little prospect of getting home.

Around 100,000 people have crossed the border into Tunisia since February 20, Tunisia’s regional Red Crescent representative said on Friday.

Britain is sending several planes to airlift thousands of Egyptians stuck in refugee camps, while France said it was sending a helicopter carrier to waters off Libya to help evacuate civilians.

PARTNER CONTENT
Where are you going this summer? Why Malta is the perfect Mediterranean escape

“I can say that those are the amounts we are talking about, and I’d also like to stress that for us the amount of money does not matter,” company spokesman Patrik Hildingsson told AFP.

Health and consumer commissioner John Dalli said he had been asked to resign on Tuesday after he was cited in a tobacco-linked influence peddling fraud probe.

The European Commission announced his resignation on Tuesday “with immediate effect” following an investigation by OLAF, the EU’s anti-fraud office, into a complaint by Swedish Match.

The Maltese commissioner has maintained his innocence, claiming he is the victim of a tobacco lobbying campaign to block tough new rules to make smoking less attractive.

In February, Dalli oversaw proposals that would tighten regulations on the use of flavouring in tobacco, which would have included non-tobacco products such as snus, or Swedish snuff.

Snus is a moist powder tobacco originating from dry snuff. Though its sale is illegal across the EU, it is manufactured and used in Sweden, which has an exemption, and Norway, which is not an EU member.

Hildingsson said the alleged €60 million bribe to a Maltese businessman with links to Dalli would have been paid in two installments, with €10 million due before new legislation was enacted and the remaining €50 million to be paid when the new rules were in place.

PARTNER CONTENT
Five unusual things you can do in Malta