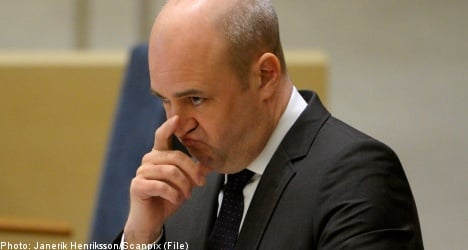 According to a new poll carried out by the Demoskop polling firm and published on Sunday in the Expressen newspaper, support for the Moderate Party has fallen by 4.4 percent.

The drop reduces the gap between Sweden’s two main political blocs, the centre-right Alliance and the centre-left Red-Green coalition, by roughly half – from a 5.5 percent advantage for the governing Alliance last month, to 2.6 percent in the new measurement.

Even with the drop, the 32.4 percent support for the Moderates still is more than any other political party in Sweden.

“The Moderates have been chugging along for quite some time. One has to realize that they have many now and fleeting voters. If you’ve got fleeting voters, there is an increased risk for a drop in support,” said Demoskop head Anders Lindholm, to Expressen.

Support for the other three parties in the governing Alliance coalition also increased, as did support for the far-right Sweden Democrats, which saw its support rise by 0.6 percent to 5.7 percent.