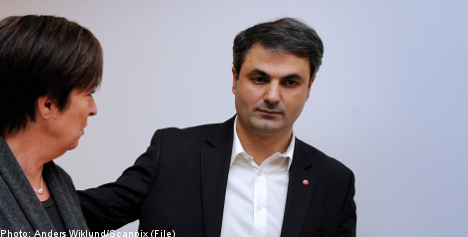 Baylan told Svergies Television (SVT) he hoped his decision to step down as party secretary at the Social Democrats’ March 25-27 extra congress will help the process of choosing a successor to outgoing party leader Mona Sahlin.

“I hope and believe that this will make it easier for the nomination committee to find a team that can lead the Social Democrats after the congress,” he told the TT news agency.

Baylan said he decided around Christmas to step down as party secretary.

“It’s a hard job to combine with being an accessible father to two small children. I’ve promised myself to never sacrifice my children for the job,” he said.

Baylan sits in the Riksdag as a representative for Västerbotten County in northern Sweden. He said that leaving the party secretary post doesn’t mean he’s leaving politics altogether.

“No, I’m really hungry for revenge,” he said.

Baylan said he never felt he lacked “personal support” within the party to continue as party secretary, but he admitted that many in the party may have perceived him as an obstacle to choosing a new leader.

He believes the party should be led by a man and a woman.

“If I remain in my position, I limit the nomination committee,” he said.

Baylan also lamented the drawn out process of choosing a new party leader.

“We all wish we could come to a decision as quickly as possible. It would make it easier for the party and our voters,” he said.

In the week ahead, the Social Democrats are expected to make a final effort to settle on a party leader candidate. During the weekend, several districts have submitted new names to the nomination committee.

Last Tuesday, the district organisations were urged to come up with new candidates after three people – Uirika Messing, Pär Nuder, and Tomas Eneroth – had all said no to the nomination committee.

A leading Social Democrat said at the time that the nomination committee had “run itself into a wall”.