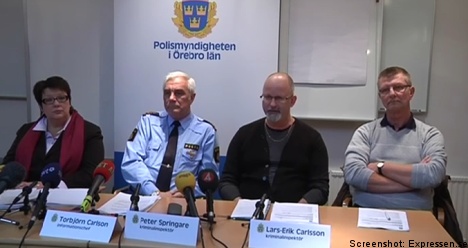 Police discuss the indictment at a March 7th press conference

Deputy head prosecutor Pia Åsberg submitted the indictment against Eliasson to the district court in Örebro on Monday morning.

According to the indictment, which covers attacks on 15 women over the last five years, Eliasson is suspected of nine cases of attempted rape, three cases of aggravated rape, one robbery, one assault, two cases of sexual molestation, and one violation of Sweden’s weapons laws.

Since Eliasson’s arrest last autumn, attacks against women have more or less come to a halt.

No previous suspect has been tried in Sweden for committing violent attacks again so many women.

He has already confessed to the attacks against the 15 women, which took place between 2005 and 2010.

He also told police that he started “stalking” people when he was only 13-years-old. The targets of his stalking could be more or less anyone, he said, adding that he followed people both during the day and at night.

Eliasson also said he had a hard time finding himself in high school, choosing to increasingly wall himself off from his schoolmates. Instead of socialising with fellow students, he instead spent most of his free time on his computer and exploring cyberspace.

He can explain what was behind his first attack against a woman in 2005. Under interrogation Eliasosn spoke of his sexual interests and how he stole women’s underway from drying lines, finding the panty pilfering exhilarating.

Eliasson’s method for approaching the women was nearly the same in every case, as he chose the women at random and then followed them.

“The most serious crime is the aggravated rape at a Europstop [rest area] last year. The violence was severe, and took place for a long time,” Åsberg told the TT news agency before the charges were filed.

She said she was relieved that Eliasson has been arrested and that the investigation into the attacks has been completed.

Many women and police officers in Örebro also feel a sense of relief.

“We’ve hardly had another report about an attack since the 24-year-old was arrested. A certain calm has fallen over Örebro,” police spokesperson Torbjörn Carlson told TT.

Even Eliasson is glad that charges have been filed and that the trial can soon begin.

“He’s also worried, but is focused on the indictment. He can’t explain what he’s done,” said his attorney Margareta Arvidsson.

The numerous attacks in the city accelerated last autumn, with three attacks taking place on October 10th, including two within 15 minutes of one another. The first attack was against a young woman on a bicycle.

In the second attack, a 64-year-old woman was raped on Egnahemsgatan.

The incident prompted police to devote sizeable resources into the hunt for what they suspected could be a serial rapist and on October 11th, Eliasson, then 23, was arrested outside his home in Örebro.

The 1,500 page report from the preliminary investigation will remain classified for the most part. Even the trial, scheduled to begin on March 17th and run until April 12th, will largely be held behind closed doors because the indictment involves so many sex crimes.

“However, the trial will be open when it comes to other crimes, the pleas, and the ruling,” said Åsberg.