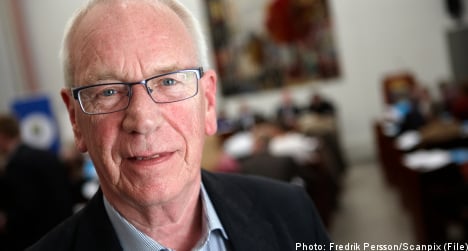 Malm, who was chairman of the Swedish Trade Union Confederation (LO) between 1983 and 1993, is one of the representatives set to participate in the Social Democrats extra congress, which has been called to elect a successor to outgoing party leader Mona Sahlin.

But the party’s closed nomination process has left him furious.

“It is completely unworthy of the Social Democratic party to treat people this way. We are elected to come together and choose a leader, not just to vote for what we are told in a purely Stalinist fashion,” he told the TT news agency.

Malm thinks the party should adopt a different leadership election process which allow attendees at the congress to choose between several candidates.

The various party district bosses who are currently blocking the selection process should face up to their responsibility and openly present their candidates.

“We look terribly old-fashioned. I’ve been part of this for almost a hundred years and never have I seen such ridiculous monkey business,” said Malm.

Former party leader Mona Sahlin has previously expressed a wish for a more open election process, but told TT that Stig Malm was not perhaps the best person to speak of openness.

“I remember just how open the process usually is to elect a LO chair, she said sarcastically to TT.