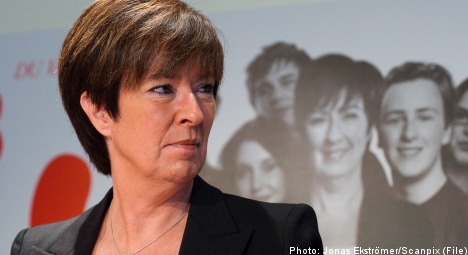 The Swedish Social Democrats’ selection of a new leader to replace Mona Sahlin has induced the most acute crisis in the 122-year history of possibly the most successful political party in the world.

It is fascinating to watch for several reasons.

For one thing, the party’s peculiar method of choosing its leader now looks woefully dated.

Basically, a “selection committee”, a group of Social Democratic elders, takes soundings from all levels of the party and then proposes a single candidate who it thinks will be most acceptable to all. This candidate is then confirmed at a party congress.

This method might seem odd, but it is used in all Swedish parties – and indeed, in many Swedish organisations.

Still, the Social Democrats have developed an extreme form, in which, by custom, no candidate should even express his or her leadership ambitions before being nominated by the selection committee.

Of the three likeliest current contenders, one has said that, if he were asked by the selection committee to lead the party, he would give it serious consideration. Another wrote on Facebook that he wants to contribute to the party’s renewal in some sort of leading position. The third has just kept completely quiet.

In my view, this tradition can be explained partly by the fear that open internal conflict might damage the party’s competitiveness, but also by the Social Democrats’ special character.

The party comprises a broad and complex coalition of ideological tendencies, regional interests and material interests (such as unions), not to mention men and women. This requires decisions, including leadership appointments, that are elaborately negotiated and that keep all these tendencies and interests broadly satisfied.

The tradition of negotiated solutions runs deep in the party. In a phrase that will surely become someone’s book title, the chair of the Social Democrats’ current selection committee dismissed the idea of more open competition between leadership candidates by declaring (to translate the quote into British English), “This isn’t the X-Factor, you know.”

The trouble is, this time the Social Democrats are failing to negotiate a solution. Just a couple of weeks before the special congress that is due to confirm the new leader, the field remains, astonishingly, wide open.

This is basically because the party is fundamentally split over how to respond to its historic setbacks.

Should it try to recapture the median voter as soon as possible – that is, to move rightwards?

Or should it instead retain (or even revive) its radicalism and, secondarily, seek to persuade the median voter to shift to the left?

This is an acute dilemma for social democrats across Europe, and it is hardly unique to Swedish ones. Still, an open competition between candidates, each with his or her own platform, might have forced the party as a whole to choose between these options.

The winning candidate would then have had some sort of mandate to pursue one course or the other. But open competition has not been allowed. Many Social Democrats are now expressing dismay at how the selection committee has conducted the process.

Meanwhile, there is an interesting riposte here to the prevailing theories of the unstoppable rise of the party in public office – that is, MPs and ministers – and the marginalisation of members and activists.

Now, this particular case study hardly falsifies such theories. But it does give pause for thought. Press reports suggest that the Social Democrats’ selection committee has essentially mediated between the party’s regional units, which, at every stage, have a decisive role in the selection of a leader. For now, at least, it is firmly in the party organisation that the action is taking place.

And, in fact, this might well be part of the party’s problem. The Social Democrats’ huge challenge is to win back support in the big cities, which fell to a little over a fifth of Stockholm voters in the election last autumn.

But the party’s decline in the capital has transferred internal power to the less urban party regions, which have more members, and which may prioritise quite different issues to those that concern Stockholmers. The phrase “vicious circle” springs to mind.

So who will get the job? The Swedish papers are having great fun printing the pictures of the three bespectacled male MPs who are apparently likeliest to get the nod, and it’s true that, from some angles, they do look pretty similar.

In fairness, the youngest of them, Mikael Damberg, who is also chair of the party’s Stockholm region, has a bit of flair. But he has declined to moderate his clear and long-held preference for taking the party towards the political midfield, which seems to have made him persona non-grata to some of the other party regions, especially from the far south and the midlands.

At this late stage, then, three scenarios seem plausible:

(1) Perhaps most likely is an 11th-hour package deal in which Damberg’s hitherto implacable opponents would be bought off with the appointment of left-wingers – and women – to other leading positions in the party. (The party’s secretary-general, a man, resigned yesterday, perhaps facilitating such an outcome.)

Or (2) the selection committee might despair of finding a long-term leader, which pretty much the entire party has said that it wants, and, as a short-term fix, it would instead propose the most experienced and inoffensive of the three likely lads.

Or (3), if the current deadlock really can’t be broken, a wild card may emerge at the last minute, perhaps someone like Pär Nuder, who is among those who have hitherto insisted that they are not interested in the job. Perhaps they didn’t really mean that.

Needless to say, none of these scenarios involves favourable circumstances for a new party leader.

Dr. Nicholas Aylott, a UK-native, is a senior lecturer in political science at the School of Social Sciences at Södertörn University in Stockholm.