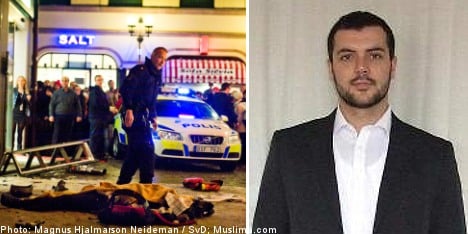 According to the Swedish prosecutor there is no indication that the suicide bomber Taimour Abdulwahab had any accomplices in place in Stockholm at the terrorist attack in December.

“Our judgement is that he was alone then,” deputy chief prosecutor Agneta Hilding Qvarnström said on Wednesday.

Qvarnström referred any questions regarding the recent arrest of an alleged accomplice in the plot, which left the bomber dead and two people injured, to the Scottish police. She was furthermore unwilling to confirm whether any measures have been undertaken by the Swedish authorities.

“But then only a day has passed since his arrest. For a journalist, one day may be oceans of time, but for us it is only a short period,” she said.

Scottish police remain unwilling to divulge any further details on the case a day after a 30-year-old man was arrested in a suburb of Glasgow in western Scotland.

According to the Glasgow Herald newspaper the British security service MI5 was involved in the arrest, but the Scottish police have decline to confirm the report with all inquiries referred to the local police in Strathclyde.

According to the arrested man’s neighbours in the Whiteinch area of Glasgow, he was from Kuwait and studying to be a nurse at a college in Glasgow, the newspaper reported.

Scottish police have meanwhile not ruled out that their may be further suspects involved in the case and are continuing their investigation near the man’s home.

Mohammad Shafi Kaus, a spokesperson at Glasgow’s Islamic Centre confirmed to the TT news agency that the 30-year-old suspect is not known to them.

“We do not know the man’s name. But try not to link the case to our mosque,” he warned, politely but firmly.

From the meeting room at the Islamic Center next to the Clyde river in central Glasgow, he described how the approximately 35,000 strong Muslim population in the city is well integrated into Scottish society.

“Our children are born here, they have received their education here,” he said, pointing out that two of his children are doctors.

That some attacks have been carried out by Muslim perpetrators born in Britain, Kaus put down to the fact that there exist sub-cultures within society and underlined that people do not generally link acts of terrorism committed by a Muslim with Islam as a religion.

Sweden’s prime minister Fredrik Reinfeldt was not informed of the operation to arrest the 30-year-old suspect prior to the information becoming public.

“There has been an arrest and we don’t know all the details about this. We shall have to follow what the Scottish judicial system concludes,” Reinfeldt said.