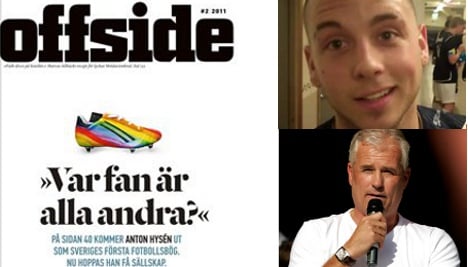 Hysén, a promising 20-year-old who has played with top flight club Häcken and has his sights set on a professional career, chose the Swedish football monthly Offside to come out about his sexuality.

“I may not play in the top flight, but I want to show that it doesn’t have to be a big deal,” Hysén told the magazine, calling on his fellow gay footballers to take a stand for tolerance.

The Swedish Football Association welcomed Hysén’s stand, expressing a hope that more gay footballers would be encouraged to talk openly about their sexuality.

”I think this is very positive. It was about time – it is part of society and it must be normal and should be nothing out of the ordinary,” Susanne Erlandsson, vice chairperson of the Swedish Football Association, told The Local on Thursday.

While several gay female footballers and other sports personalities have spoken openly about their sexuality, Anton Hysén is the first male Swedish footballer to do so and he admitted that his coming out could affect his chances of a return to the top flight.

”There are many people who can’t handle homosexuals. And there are racists who can’t handle immigrants. It may happen that a club shows interest and then the trainer finds out that I am gay. But that is their problem, not mine,” he told Offside.

Ulrika Westerlund at the Swedish Federation for Lesbian Gay, Bisexual and Transgender Rights (Riksförbundet för homosexuellas, bisexuellas och transpersoners rättigheter – RFSL) concurred that homophobia, like racism, remains a barrier within sport in Sweden and that Hysén’s stand could only help to break these down.

“I would say that there are a great number of young boys out there who will see Anton as a role model today – he has shown that you can be gay and be a skilful footballer,” she told The Local on Thursday.

“This is very courageous. This is the most normal thing in the world these days,” Hysén, who now works as a commentator and pundit, told the Aftonbladet newspaper.

Glenn Hysén is himself seen as something of a role model for tolerance in sport, after he featured as opening speaker at the Stockholm Pride festival in 2007.

His appearance was however controversial when it had emerged that he had punched a gay man in the face after he was approached in a Frankfurt airport toilet in 2001.

“Glenn Hysén is a machoman who is on an LGBT journey. He has previously expressed himself very controversially, but today he thinks about LGBT issues,” Sofia Sjöö, president of Stockholm Pride, said in defence of his recruitment at the time.

While Anton Hysén’s famous father has been given credit for coming a long way in his attitudes to homosexuality, some reactions to his own frank declaration have shown that homophobia remains a problem within football.

Major Swedish football website fotbollskanalen.se, which is operated by national TV channel TV4, was forced to shut off its comments function on Wednesday after a wave of insults greeted the news of the young player’s interview.

While the Swedish Football Association lamented the reactions, Susanne Erlandsson said that attitudes are changing.

”This is naturally sad to hear. But just as with music artists, when one comes out, more will follow and it won’t be so dramatic,” she told The Local, adding that the association works continually to tackle prejudice in sport.

”We have it written into our constitution that all are welcome regardless of race, gender, sexuality. We work continually with our basic values and will continue to do so,” she said.

Glenn Hysén also warned that it is likely that both Anton and his older brother, former Sunderland striker Tobias, can expect to be the target of some derision and insults from the terrraces, and even from team mates within the dressing-room.

”There is quite a special lingo there. There are jokes about gays, jews and negroes and so on,” he said adding,”but it’ll calm down pretty fast, this is the most normal thing in the world these days”.

Ulrika Westerlund however told The Local that not enough is being done to effect change and was in no doubt where the responsibility for change lies.

“The responsibility is never with the individual, if they wish to come out about their sexuality that has to be their own choice; the responsibility lies with the trainers and those in leadership positions within the sports world.”

“They have to show that the dressing room attitudes referred to by Glenn Hysén are not acceptable.”

PARTNER CONTENT
World Cup 2022: How to watch every game, wherever you are 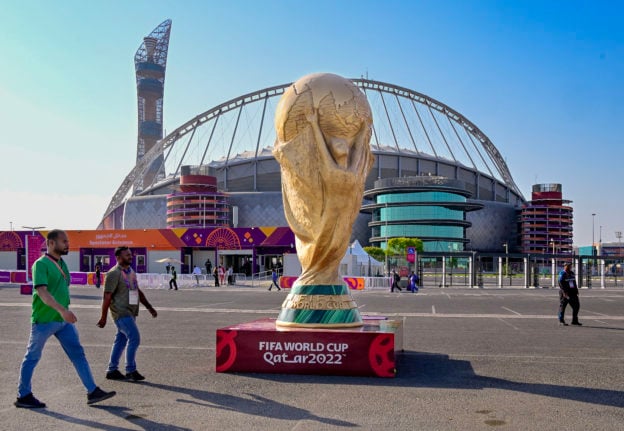 SPORT
How can I watch the 2022 World Cup on Swedish TV?
Url copied to clipboard!