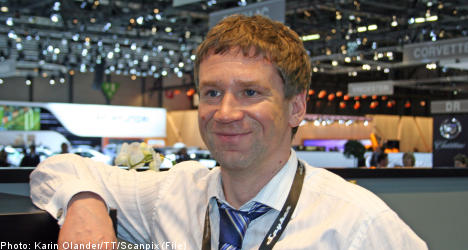 “If the goal isn’t reached it would be nice for Saab to have €50-70 million ($69-97 million) as a little something extra to lean on. We’re ready to provide that money if we’re allowed to do so by the EIB,” Antonov told the TT news agency, referring to the European Investment Bank.

He added that he doesn’t see any risk that the EIB would withdraw its loan to Saab if he is brought in as a financial backer for the company.

“The EIB has fantastic security and a fantastic interest rate for the Saab loan. Why would they take it back? For the moment, everything is working well,” said Antonov.

However, he still wants to put pressure on the EIB to let him be a financier of Saab, which he claims that bank isn’t prepared to do.

“Toward the end of the year, there’s a risk that Saab will need another financial partner and it’s not easy to find one. But we want to because we think Saab is a good investment,” he said.

When Spyker Cars bought Saab from US carmaker General Motors (GM) last year, the business model stipulated that GM would pay for equipment and remaining debt and that Saab would also receive a loan from the EIB worth €400 million.

The Swedish government also provided state guarantees for the loan, with Saab assets serving as collateral.

The loan is paid out in several parts and runs through 2016. Saab pays interest to the EIB and a guarantee premium to the Swedish state.

According to Antonov, Saab would go bankrupt “in a few days” if the EIB withdrew the loan.

“But that’s never going to happen. There’s no reason for it. I don’t see any risk that the Swedish state would need to go in and take over the loan,” he said.

The specific agreement between Saab, the EIB, and the Swedish state, remains confidential, according to Daniel Barr of the Swedish Debt Office (Riksgälden).

“In the agreement, just as in any other major loan agreement, there is a ‘change of control’ clause, which means that the loan provider must approve all major ownership changes. We haven’t received any inquiries about any large ownership changes,” he told TT.

He added that he was familiar with press reports about Antonov’s interest in investing in Saab, but his agency hasn’t been approached about the matter.

“That’s something for Saab or Spyker to inquire about,” he said.

Antonov was force out as a major owner in Spyker Cars in order for the Saab deal to go through. In reality, he lent most of the roughly $100 million to Saab board chair Victor Muller’s company – money which was used in part to purchase Saab and in part to resolve Antonov’s ownership stake in Spyker.

The Russian financier has already agreed to by Spyker Car’s heavily-indebted sports car operations, and has also expressed his interest in owning Saab.

He believes the business plan can work and that Saab can be profitable, but he thinks that 2011 sales forecasts are a bit optimistic.

“I’m not involved in how the company is run so I don’t have access to the numbers. But according to earlier versions of the business plan, they have to sell 80,000 cars this year to stay with the plan. From my point of view, I think that’s a bit too optimistic,” he said.

In order to invest in Saab, he and Muller are working to find other financing so that the EIB loan could be paid back.

According to Antonov, they are speaking with several different groups, including banks.