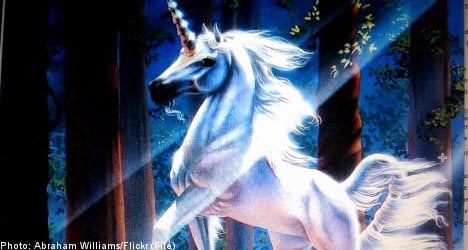 The Swede’s email came as a mocking response to a promise by the parent company of Corbin Fisher, a US-based producer of gay pornographic films, to provide suspected file-sharers amnesty from copyright infringement lawsuits if they paid the studio $1,000, the tech news website TorrentFreak.com reports.

“I have been sharing a whole load of your files… on every torrent site like PureTna, Kickasstorrents etc. I am very sorry for doing so and would like to pay you the $1000 for amnesty…,” began the Swede’s email.

“…this is of course from the pot of gold I got from the leprechaun at the end of the rainbow,” it continued.

Further on in the email, the Swede mentions he has a pet unicorn which has a rather pointed message for the movie studio.

“…excuse me a minute but my unicorn is again shouting something about how you can shove it up your backdoor,” wrote the Swede.

Speaking with TorrentFreak, the Swede – referred to in the report as Ryan – explained that he wrote the email so he could “get a few laughs”.

But the Swede’s email was no laughing matter to the lawyers at Corbin Fisher, who subpoenaed his Google account information, including IP-addresses associated with the account.

When the Swede contacted lawyers with Corbin Fisher they explained that the film studio had taken his fairytale confession seriously and were considering legal action.

While Corbin Fisher has received the Swede’s Google account information, it remains unclear exactly what the studio plans to do next, TorrentFreak reports.