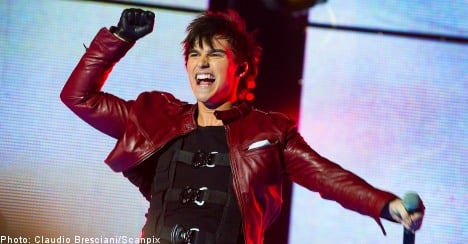 Saade’s performance of “Popular” at the Ericsson Globe Arena in Stockholm lived up to its name with both the international jury as well Swedish viewers, who together gave Saade an insurmountable total of 193 points.

“This is totally indescribable,” he said shortly after being named the winner.

“I want to celebrate with the entire population of Sweden.”

Saade, who also made it the 2010 Melodifestivalen finals with his performance of “Manboy”, triumphed over the pre-show favourite Danny, in what had been billed as a battle of boy-band alums for the contest’s top spot.

Third place went to The Moniker’s “Oh My God!”, with Sanna Nielsen’s “I’m in Love”, taking the fourth spot.

Fifth place went to Swingfly, who performed “Me And My Drum”.

Heading into the final, the hotly tipped Danny, who made the Melodifestivalen finals in 2009 as a member of boy band E.M.D. was thought to have the edge over Saade, an ex-member of the boy band What’s Up.

The two were neck and neck after the international jury votes had been tallied, with Saade having a slim two-point edge.

But after the 1.32 million votes cast by Swedish television viewers were counted, Saade’s lead grew by more than 40 points, securing his place at the top.

Saade will now represent Sweden at the 2011 Eurovision Song Contest, scheduled to take place in Düsseldorf, Germany in May.

Saade’s song was written by Fredrik Kempe, who also wrote “Manboy” and has written the winning song of the Melodifestivalen three out of the last four years.

See Eric Saade perform “Popular” in the video below