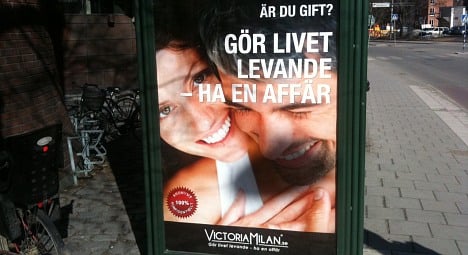 Married travellers waiting for buses in Stockholm are currently being confronted with the challenge “Are you married? Liven up your life – have an affair” in the form of a billboard campaign from Norwegian firm Victoria Milan.

The billboard campaign is backed up by a film which encourages those feeling trapped and unhappy in their relationships to sign up for the dating site and find a like-minded clandestine soul mate.

But criticism of the firm’s business idea and advertising message has quickly followed the weekend campaign launch, with the Swedish Advertising Ombudsman (Reklamombudsmannen – RO) having already received complaints from three individuals.

Sigurd Vedal is the CEO for the Norwegian firm behind the site and he has been quick to launch a defence of the apparent attempt to exploit marital difficulties.

“I understand that people react. But no one who is happy within their relationship will make use of our service just because we advertise,” he told the Aftonbladet daily.

Registration on the site is free but a paid membership is required in order to go beyond simply viewing other lonely hearts and actually getting in contact with potential partners.

Many visitors to the firm’s Facebook page are openly scathing in their criticism of the Victoria Milan business model.

“You are the sickest firm I have ever experienced. You are a disgrace to Swedish business… that you encourage infidelity (with all the consequences for couples and not least their children),” one person wrote.

The firm’s marketing explained that the company was founded “as a result of the fact that a large proportion of people who are members of other dating sites lied about their marital status.”

Despite the heated response from some quarters, Sigurd Vedal is unrepentant.

“We are a dating site which is very clear and direct, in contrast to many other sites out there. In a very competitive market one has to be clear with one’s message and target group,” he told Aftonbladet.