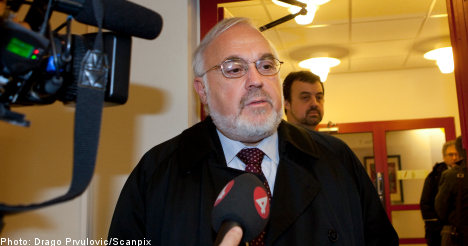 The group among other things blasted Swedish authorities for making the community pay the equivalent of a “Jewish tax,” since they themselves had to foot the bill for most security measures, including setting up anti-attack barriers in front of the synagogue during religious celebrations.

“It is long overdue that the Swedish authorities assume the costs of the security of the Jewish institutions, especially in a community of 800 people that’s been suffering from incidents,” Rabbi Abraham Cooper, the centre’s associate dean, told AFP.

A spokesman for Democracy Minister Birgitta Ohlsson, who met with Cooper in Stockholm Tuesday, told AFP that “discussions” were going on within the government about the issue, but would not provide further details.

Representatives from the organisation are currently visiting the southern Swedish city of Malmö for meetings with a number of Swedish officials, including Mayor Ilmar Reepalu, who has previously been criticised for remarks about the city’s Jewish community.

The Wiesenthal Center still feels the situation for Jews in Malmö is serious and has proposed a number of measures to improve the situation. However, a travel advisory issued in December will likely remain in place for the time being.

“If the status quo is maintained, the Wiesenthal Center’s travel warning will remain,” the group said in an email sent to the TT news agency.

Following a meeting on hate crimes between Reepalu and Cooper, it appeared that differences remain in how both of them view the situation in Malmö.

While Reepalu told reporters the meeting was “very good, direct, and open”, Cooper was more sober, explain that “we have a lot of work ahead of us”, according to the Sydsvenskan newspaper.

Malmö, which is Sweden’s third largest city with a population of around 300,000, is home to some 800 Jews, alongside a large, mainly Muslim, immigrant community.

Some 400 anti-Semitic acts were registered in Malmö in 2009 alone, accounting for more than half of the total number of hate crimes in that city, and several Jewish families have left in recent years due to the threatening atmosphere, according to local Jewish representatives.

In December, shortly after Stockholm suffered its first-ever suicide bombing, the Wiesenthal Centre issued a rare warning, cautioning Jews to avoid traveling to Malmö and telling the ones already there to be very careful.

Referring to numerous instances of harassment against people who are visibly Jewish, Cooper asked “How could that happen?”

“In a country that rescued the Jews coming from Denmark during World War II, how come a rabbi can (no longer) go to the synagogue with his two children?”

In early 2009, a Davis Cup tennis match in Malmö between Sweden and Israel was forced to play behind closed doors due to security concerns amid massive ant-Israeli protests over the Gaza war.

Malmö mayor Ilmar Reepalu has also faced harsh criticism for not taking the threat against the city’s Jewish community seriously enough and for comparing Zionism to anti-Semitism.

After meeting with Cooper Monday, he stressed to the TT news agency that he in no way was making light of the situation.

“Every single Jew who feels fearful and afraid is one too many. This is completely unacceptable,” he said, adding that it was up to the national government to provide more funds for addressing the problem.

“I really hope that the state will prioritise Malmö in this matter,” he said.