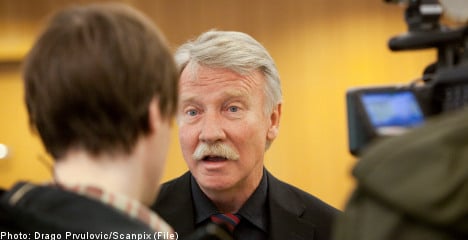 Following a five-day visit to Malmö in southern Sweden, one of the Wiesenthal Centre’s representatives, Dr. Shimon Samuels, has penned a letter in which he forwards strongly worded criticism of Reepalu, according to the local Sydsvenskan daily.

Samuels has taken offence over Reepalu’s comments after Monday’s meeting in which he said the responsibility for policing was a matter for the police and the justice ministry in Stockholm.

One of the proposals discussed at the meeting concerned the formation of a hate crime police unit along the lines of a US model.

“We wrote to Beatrice Ask already a couple of years ago but have not received a reply. Perhaps the Wiesenthal centre with its power and influence can draw a better response,” Reepalu said of the initiative.

The mayor’s reference to the Wiesenthal Center’s “power and influence” has however incurred the wrath of the US Jewish leaders and Samuels argued in his letter that the comments “echo the conspiracy theories against Jews in the 1930s”.

Reepalu has previously been the target of criticism for allegedly failing to protect Jews in the city and for comments to the media which were interpreted to indicate that the city’s Jewish committee had some responsibility to denounce Israel.

After several days of meetings designed to find common ground, Samuels’ letter renewed prior criticism of the mayor and Sweden for failing to take the concerns of the city’s residents seriously.

Reepalu, who has hitherto been cautious of countering prior criticism from the Wiesenthal Center, was however unable to hold back on receipt of the letter.

“I have said that it is always dangerous when one group considers itself worth more than another group of people. When people say that we have a right to take your land because we have some form of thousand-year promise from God that this is our land, then it creates conflicts,” Reepalu said to Sydsvenskan.

“Then they say that I am anti-Semitic when I put this across. I am flabbergasted that they are then able to tie all this together,” he said.

Reepalu continued to question whether the Wiesenthal Centre, which describes itself as a “global Jewish human rights organization” from six offices worldwide and claims a constituency of 400,000 households in the US, was simply a research centre.

Samuels’ letter ends with an ultimatum to the mayor to say that if he doesn’t start to take the issues discussed seriously then the warning issued by the centre in December against travel to Sweden’s third city, will remain in place.

“To be honest with you I think we are working as seriously as we can with these issues, and we will do so regardless of what they say, think and feel,” Reepalu told the newspaper.

In an interview later on Friday, Reepalu explained that the Americans may have misunderstood the role of a Swedish mayor. In practice the position is held by the head of the municipal council and is not a directly elected post.

“They live in the belief that as the ‘mayor’ I can order what the police do and do not do. They do not accept that I do not have that power,” he told the TT news agency.