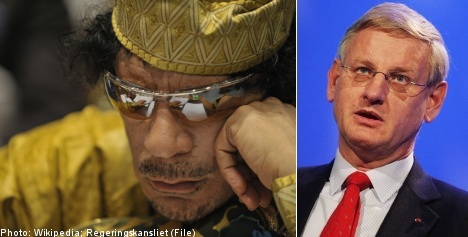 Bildt underlined that while Sweden has no current plans to assist in the operation, any NATO request would be considered.

“NATO must first take a decision and decide on its military contribution. We will then see if they (NATO) need to solicit other countries,” he explained.

While Bildt ruled out sending Swedish troops and participation in the military operation, he did not rule out some participation for Sweden in the longer term.

On his personal blog, Bildt expressed satisfaction that the council’s resolution had provided for more than just a no-fly zone, a measure which he observed had little effect on Srebrenica (referring to the town in the former Yugoslavia known for the massacre of up to 8,000 Bosnians in July 1995).

UN Security Council Resolution 1973 cleared the way for military action against all threats to civilians, stopping short of a ground invasion but including aerial bombardment of Qaddafi’s forces on the ground if necessary.

Bildt expressed a hope for “rapid and robust measures” which would enable the establishment of the political phase of the raging Libya conflict.

“I hope that the measures which the Security Council resolution allows can lead to a political process which means a new Libya without Qaddafi,” he said.

In a briefing to parliament on Friday, Bildt explained Sweden’s position that any military action by Security Council members should be implemented in cooperation with the Arab League.

While Sweden is not a NATO member, it has been a member of the NATO’s Partnership for Peace programme since 1994 and participates in the alliance’s International Security Assistance Force (ISAF) force in Afghanistan.