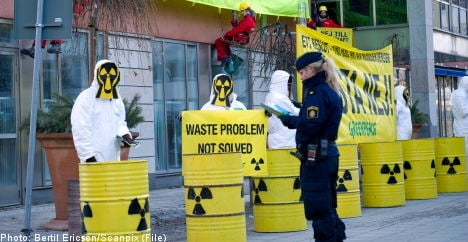 Some 64 percent of the 750 interviewed replied no to the question of whether Sweden should build new nuclear reactors, reported the Göteborgs-Posten daily. Around 27 percent were positive to the idea.

Women as a group were more inclined to be against the idea, with 74 percent expressing their opposition while 54 percent of the men were against.

The ongoing catastrophe at the Fukushima nuclear plant in northern Japan has dominated headlines in Swedish media since the country was hit by a massive earthquake and tsunami n March 11th.

The battle to cool the power station’s reactors has served to awaken the Swedish anti-nuclear movement and demonstrations have been seen at several locations.

Sweden generates 50 percent of its electricity supply from 10 reactors at the three power stations – Forsmark, Ringhals and Oskarshamn – currently in commercial operation.

Sweden’s first nuclear power station designed exclusively for power generation was opened in Oskarshamn in southern Sweden in 1972, After the accident in Harrisburg, USA opposition to nuclear power began to grow in Sweden and led to a referendum in 1980.

All three alternatives in the referendum concerned the closure of Sweden’s nuclear power stations, but presented varying timeframes.

Political opposition to nuclear power declined steadily after 1980 and the recent decision of the Centre Party to give up its demand for a rapid closure of the reactors was seen as something of a milestone in the acceptance of nuclear power.