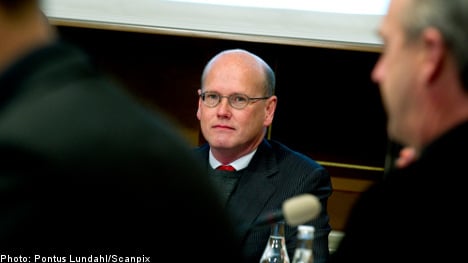 The nominations committee has presented its proposal for consideration at the upcoming party congress and the ejection of Östros and Johansson has been taken to mean the party seeks a fresh start from the Sahlin era.

The committee has proposed that former culture minister Leif Pagrotsky, and early contenders for the leader ship post, Veronica Palm and Mikael Damberg, make up the powerful national executive committee.

Damberg has previously held a deputy position on the committee.

“They want a new line-up and show the voters that they are taking this crisis seriously, that there is something new, fresh and there are new ideas being brought to the party hierarchy,” said political scientist Jenny Madestam.

“I’m really looking forward to more responsibility and being involved in the major regeneration work that this party needs,” said Palm.

Ylva Johansson, the party’s labour market spokesperson, is set to vacate her deputy post on the committee as there is only space for one person from the party in Stockholm and this place is to go to Palm.

“I would have liked to continue on the executive committee. It is a sad moment for me to have to leave, but I don’t think it is that dramatic,” said Johansson.

The proposal of Veronica Palm and Mikael Damberg indicates a generation shift in the party, with both being under forty-years-old, although it is ideologically more difficult to interpret as they are polar opposites.

“The ambition seems to be to unite the party. They want to show that this new leadership will consist of many different Social Democrats,” said Jenny Madestam.

The make up of the committee will also have an impact on the appointments of spokespersons in the various fields. These appointments are made by the parliamentary party and not by next week’s congress.

This indicates that Ylva Johansson and Thomas Östros are likely to also lose their positions as labour market and economic policy spokespersons respectively.

According to Sveriges Television, Mikael Damberg is proposed as the replacement for Thomas Östros in the heavyweight role of economic policy spokesman.

Leif Pagrotsky has previously said that he is not interested in that position.

A further executive committee deputy – a woman – is yet to be presented.

Other positions on the committee are filled by trade union congress leader Wanja Lundby-Wedin, as well as the party leader and party secretary – Håkan Juholt and Carin Jämtin (subject to congress approval).