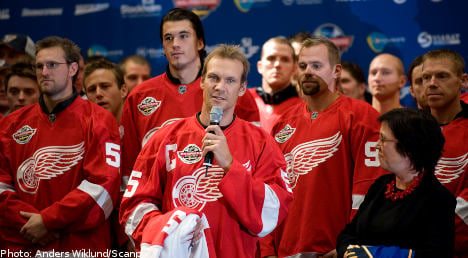 The city of Novi, where the Swedish star and many of his Detroit teammates have their homes, has decided to name the road leading up to the Novi Ice Arena after the Swede, the team reported on their official website last week.

“I’m truly honored to be recognized like that and to have a street named after me,” Lidström said.

Lidström lives in the Oakland County community where the arena is located and where the Nick Lidstrom Drive will now serve as testimony to the big Swede’s impact on the sport in the area.

Red Wings captain Lidström has a long list of accomplishments in the NHL, including winning the Stanley Cup four times and the James Norris Memorial Trophy (awarded annual for the best defence player) on six occasions.

The 40-year-old from Avesta in central Sweden is widely heralded as one of Sweden’s finest exports to the NHL and was recently described by The Hockey News journal as a “freak of nature”.

The journal has also voted him the “Best European-trained player ever in the NHL”.

Lidström will join former teammate Steve Yzerman as the only Red Wings star to be given the honour of a local street name. However when the idea was first touted, Lidström reported feeling “overwhelmed” by the offer.

“First, I was like, ‘Wow! They would do that for me?’ ” he said. “It was that kind of feeling, but then it quickly turned to being an honour.”

Nicklas Lidström was part of the Swedish team which won the World Championship in 1991 and he was a major factor in Sweden’s 2006 Olympic win, scoring the gold medal clinching goal which earned him a spot on the Olympic All-Star team.