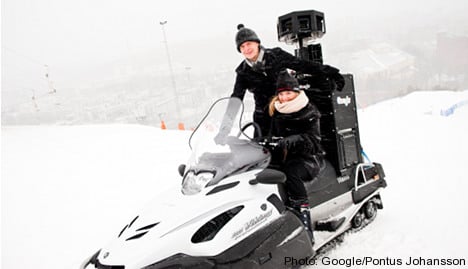 These pictures will soon be made available in Google Street View so that ski buffs, tourists, ramblers and other winter sports enthusiasts will get a chance to experience the virtual Swedish alpine possibilities.

So far, Google has used cars and three wheelers to document Sweden for their Street View map service, but when hitting the slopes, a specially designed snowmobile was called into action.

The 3.3 metre long snowmobile, equipped with the latest in photo technology and GPS, has documented the ski resorts Sälen, Vemdalen and Åre in the north of Sweden, but they also visited the Stockholm slope Hammarbybacken.

Anna Qviberg from the ski resort operator Skistar thinks that it is a good thing for Swedish tourism to be able to exhibit their product to foreign visitors via the service.

“We see it as very positive to be able to give our potential visitors a preview of the ski slopes here in Sweden,” she said in a statement.

Street View is a service that allows users to view street scenes on Google Maps and take a virtual “walk” through cities.

It has however been dogged by controversy around Europe since its launch and Google was in trouble in Sweden in 2010 when it mistakenly captured data from wireless networks while taking photos for Street View.

The slopes and resorts documented have all agreed to participate and the service was provided free of charge.

TRAVEL NEWS
What are the Covid rules in place at ski resorts around Europe this February?
Url copied to clipboard!