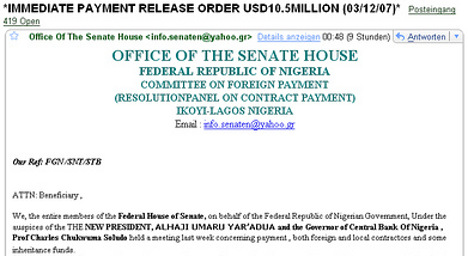 An increasing number of elderly Swedes have in recent months received letters or e-mails containing offers of imaginary inheritance pay outs. Those falling for the scams have been fooled to part with savings amounting to several million kronor, according to the Swedish police.

“We have seen these frauds in the past but not to the extent that we have now,” Commissioner Stig Sandgren at Stockholm City Police said.

Nigerian letters are a form of fraud which originated in Nigeria in the 1970s, but are today often organized from a number of countries.

The elderly Swedes are among those who have sent money to bank accounts in the UK, among other places, with the ill-gotten gains then transferred on to other parts of the world.

Furthermore a number of Swedes have even travelled to England to meet the fraudsters, Sandgren confirmed. At these meetings, the unsuspecting victims were given a look at the money they were due to inherit – often in excess of several millions of dollars.

“They were completely fleeced in England,” said Stig Sandgren.

He explained that the victims were fooled into believing that the inheritance was real and were persuaded by the plethora of stamps and official-looking documents.

“But in reality it is all false,” he added.

The fraudsters operate in a number of countries, Sandgren said, with Spain and the UK featuring strongly in investigations.

“The men are polished and act under false identities. We don’t know who they are.”

Nigeria letters are also known as ‘advance-fee fraud’ and are a confidence trick where victims are persuaded to forward large sums of money in the hope of receiving a significantly larger sum.

The money is often requested for transaction costs or to pay bribes.

The fraud is also known as ‘419 fraud’ – referring to the article of the Nigerian criminal code dealing with fraud – as well as ‘the Spanish prisoner’, and the ‘black money scam’.

The modern scam is reported to have accelerated in use in connection with the decline of the oil-based Nigerian economy in the 1980s and has expanded globally and in intensity with the widespread use of email.