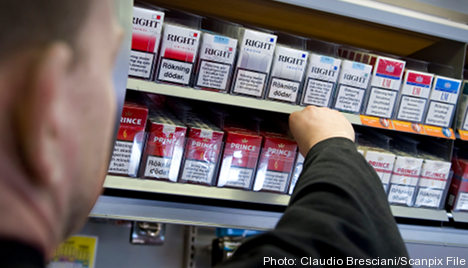 Government parties are however resisting the move due to lack of available data connecting a ban with a decrease in tobacco sales.

Eva Olofsson, of the Left Party, is one of the advocates for a ban.

“The aim is to get less people overall to smoke and less children and young people to start smoking. To achieve that, sales must decrease. This might be one way to tackle that,“ she said to Sveriges Radio (SR).

The UK Health Department decided earlier this month to ban tobacco displays from large stores in England from April 2012, with smaller shops following suit by 2015 at the latest.

Scotland and Northern Ireland are well on their way towards banning displays of tobacco. In Europe, it is already implemented in Ireland, Finland, Norway and Iceland.

Across the globe countries like Australia, Canada, Thailand and the republic of Trinidad and Tobago have also decided to ban the displays.

According to Ulrik Lindgren of the ministry of health and social affairs, this is due to the lack of data supporting a connection between a ban and a decrease in tobacco sales.

According to Sveriges Radio, tobacco companies are of the same opinion.

Ulrika Dennerborg, of Philip Morris Sweden, told SR that sales figures from Norway where a ban is implemented, give no indication of a decrease in sales.

“This measure has no proven effect, but what it does achieve is remove any chance to compete on the market,” she told SR.

According to the institute, the number of smokers in Sweden today is low by international standards, with 13 percent of Swedish women and 11 percent of men smoking on a daily basis.

But despite these figures, the total tobacco usage in Sweden is till significant, mainly due to the Swedes’ moist snuff (snus) habits.