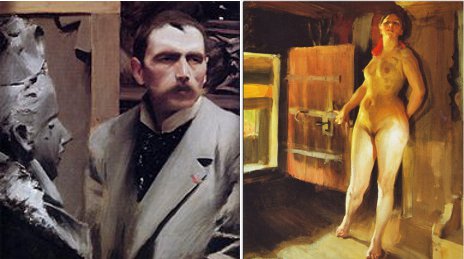 Danish performance artist Uwe Max Jensen was furious after Facebook removed a copy of Zorn’s 1905 painting ‘The Girl in the Loft’ that he had posted to the social networking website along with several other paintings by the artist, who died in 1920.

The Dane has previously posted other images that contravene the American company’s policy, and Facebook has now blocked Jensen from posting any further images to the site.

In 2005, Jensen was fined 2,000 Danish kroner (now $380) for urinating on a wall. The peeing demonstration was intended as a piece of public art demonstrating the transitory nature of existence.

Facebook’s Swedish spokesperson, Jan Fredriksson, said the company had a clear anti-nudity policy, with members as young as 13-years-old using the site in countries all over the world.

The Zorn painting had most likely been reported to an administrator, he said, who then had to decide whether to remove the image.