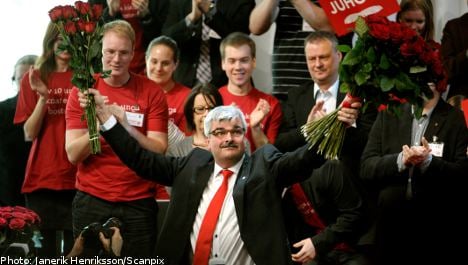 “There is another way and a different choice,” Juholt said in delivering his first speech as leader to the party congress in Stockholm.

While conceding that the economy was strong and that unemployment was falling, developments that he professed to feeling “delighted” over, Juholt reserved stinging criticism for the centre-right government.

“Excess prices at pharmacies lead to multimillion profits in tax havens,” he said, going on to attack bumper profits at firms running schools and healthcare.

Juholt argued in his speech in favour of strong state finances and claimed that (finance minister) Anders Borg was able to draw on the reserves built up by (former Social Democrat prime minister) Göran Persson to help Sweden tackle the finance crisis.

Juholt went on to offer his analysis of why the Social Democrats lost their second successive election in 2010, arguing that the party was unable to offer voters a credible vision of society.

He argued that voters need the party to demonstrate that it understands the present, and identified this as the key to reclaiming power.

Juholt quoted former Social Democrat leader Tage Erlander when he argued that there is no contradiction between security and freedom, slamming the government for prioritising tax cuts over increased benefits to the needy.

“It is always the vulnerable who pay the most when deficits soar.”

According to political science professor Ulf Bjereld the speech, while rhetorically strong, left little to fear for the right in the party as it lacked concrete proposals.

“It is perhaps one of the most rhetorically skilled we have heard in the party since Olof Palme’s days,” Bjereld said. “The right-wing can take solace in that there was very little… that suggested a swing to the left.”

Bjereld observed, for example, that Juholt made no mention of hiking taxes, school grades or nuclear power.

When asked whether Håkan Juholt would send the party towards the left on the political scale, Bjereld replied:

“With regard to privatization I think he will put the breaks on there. He took a strong stand on that,” he said, while pointing out that even amongst the centre-right parties there is some criticism on the sale of state assets.

The Social Democrat congress is scheduled to continue until Sunday and during the weekend Carin Jämtin is expected to be appointed as new party secretary.