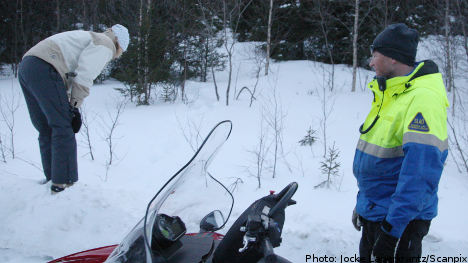 The bear attacked the boy when he, together with four other friends, disturbed her winter lair while skiing off-piste at the ski resort in Härjedalen.

After the attack, the bear then fled into the forest and Jämtland county administrative board contacted conservationists to assess whether she could pose a danger to others.

But now the concern has turned to her cubs who are still in need of their mother’s milk and risk death within five or six days if she doesn’t return.

Nearby Orsa animal park has said that it wants to be allowed to care for the bears and representatives will meet the the National Environmental Protection Agency (Naturvårdsverket), Jämtland county and the police in the Jämtland later today to discuss the fate of the cubs.

12-year-old Olle Frisk was rushed to Östersund hospital after suffering bites to both legs and a clawed back at the hands of the newly woken bear. He told the local Östersunds-Posten daily on Monday that he thought he was going to die.

“I accepted death, that was the feeling, let it come,” he said.

Frisk is now reported to be feeling fine under the circumstances but in addition to the deep wounds that he suffered he has been hit by a stomach virus.

He told the newspaper how he had been skiing with his friends when he flew over a bump only to see a brown bear poking its head out of it lair. He tried to stop but fell straight into the lair at which point the bear threw herself over him.

It was only when he stopped trying to fight the bear that he was given a chance.

“It then became quiet and she then stepped over me and left. I think she thought I was dead as she stopped messing with me,” he told the newspaper.

His friends helped to scare off the bear and he was able to make his way out of the lair and down the slope to seek help.

Doctors at the hospital have told him that he will be able to able to leave in the beginning of next week.