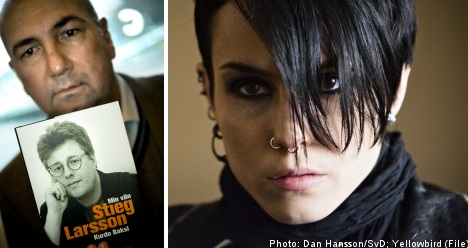 “Lisbeth Salander’s twin sister Camilla is given a more prominent role,” Baksi told the Expressen daily referring to the hacker-heroine at the heart of the Millennium books which so far amount to a trilogy.

According to Baksi, the book’s story is set on Canada’s Banks Island and the relationship between the investigative journalist Mikael Blomqvist and Lisbeth Salander is taken to new depths of intrigue.

It has been widely reported that when Stieg Larsson died suddenly on November 9th, 2004 that he had plans for a series of five or six books within the Millennium series.

Eva Gabrielsson, Larsson’s partner for 30 years, has indicated that a large part of a fourth manuscript is contained in a computer left to her as part of Larsson’s personal effects.

In her biography of their life together “Stieg and I” (Stieg och jag), Gabrielsson has given the book the working title “God’s revenge” (Guds hämnd).

The contents of the computer have featured from time to time in the bitter struggle between Gabrielsson and Stieg Larsson’s father and brother who instead inherited what became the large part of his estate due to the fact that the couple had not formally married nor completed a will.

Stieg Larsson had already signed a contract with Swedish publisher Nordstedts for the three completed works and the trilogy has gone on to become a huge success both in Sweden and among international audiences, reportedly earning his estate in excess of 200 million kronor ($31 million).

Baksi, who is featured in the Millennium books, worked with Larsson on the Swedish anti-racist magazine and foundation Expo and is recognised to be one of those who stood closest to the author.

His book “My friend Stieg Larsson” (Min vän Stieg Larsson) came out in 2010 and has been published in more than ten languages. His tale of their friendship and Stieg Larsson’s work as an author and a journalist has helped to maintain the massive interest in the thriller writer’s life and work.

Daniel Poohl, chief editor at Larsson’s creation Expo, told Expressen that the amount of diverse notes left by Larsson might even stretch to three more full manuscripts, but raised questions over whether they could be turned into a book.

“I have personally found notes on napkins. But it isn’t easy to write a book from a napkin,” he told the newspaper.

Baksi however confirms information included in an email sent by Larsson to another friend prior to his death that the fourth book exists in the form of a detailed introduction and a finale.

Lisbeth Salander’s estranged sister Camilla featured only fleetingly in “The Girl Who Played With Fire” – the second of the published trilogy – but, according to Baksi, the twin’s character is given more prominence in the fourth novel.

Furthermore, Baksi told Expressen, Larsson had plans to send Lisbeth Salander on a trip to Greenland, although he was not sure in which of the novels this would occur.

Eva Gedin at Nordstedts told the newspaper that she is unaware of any pressure from publishers for a fourth book, saying that “we have been clear that there are only three”. She revealed however that she often fields calls from foreign journalists asking if there are any plans to continue the popular series.

Meanwhile the success of the three completed and published books continues.

The latest award to be bestowed on Noomi Rapace, who played Salander in the Swedish films, was announced at the weekend by the UK movie magazine Empire.

Rapace, who has lined up a string of international roles following her Millennium success, won the Empire Award best actress category, while “The Girl with the Dragon Tattoo” won best thriller.

The Hollywood remake of “Tattoo” is set to hit cinema screens on December 21st 2011, sure to bring with it another round of speculation as to the existence and prospect of a fourth post-mortem Larsson tale.