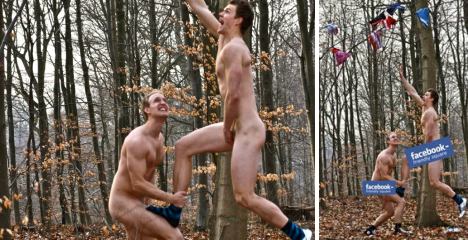 “We realized it was probably the most daring image we had ever uploaded, but were confident it was still within what is considered OK,” Micke Kazarnovicz, responsible for digital communication at Björn Borg, told The Local.

Many companies use Facebook to reach the 4 million or so users in Sweden. One of these is Björn Borg, who since 2007 has a large platform of user-generated content on their page.

Fans upload their own images and every week the company chooses a picture, which becomes the “Swedish export of the week”.

The happy snapper gets rewarded with free underwear and a chance to see his or her image posted on the official Björn Borg Facebook page.

But this particular image, taken by Jacob Mohr Hansen from Denmark, proved too much for Facebook.

The picture, uploaded around lunchtime, got many hits and many users left comments. But by the evening it had been erased.

“They saw this as pornographic, but to us it was really more a laugh, completely tongue in cheek. There is no eroticism at all in the picture, just nudity,” said Kazarnovicz.

Although he doesn’t think that Facebook has a policy about same-sex nudity the fact that the two men were seen naked together might have led to homophobic reactions and comments from the public.

“It was probably completely automatic. Someone reported it as offensive and then a moderator looked at it, consulted his rulebook and then erased it,” he said.

However, Kazarnovicz is certain that this has to do with differences between what is considered OK in Sweden compared to the US.

“In the US, violent scenes in films are accepted, but if a nipple is visible there’s a huge controversy. In Sweden it is the opposite,” he said.

According to Kazarnovicz, Facebook can’t continue to act in line with American morals on a global arena. It becomes a question of culture imperialism.

“They probably don’t have a policy to do this, but in reality, as soon as they moderate content according to the likes and dislikes of the average American, that’s exactly what they are doing,” he said.

For the moment, Björn Borg has made use of a blue square with the words “facebook friendly” covering the buttocks of the naked men.

But Kazarnovicz is certain that they will run in to trouble again. He thinks that Facebook needs to be more aware of the cultural differences of its users.

“Otherwise they are promoting a cultural uniformity that really shouldn’t be pursued,“ he said to The Local.