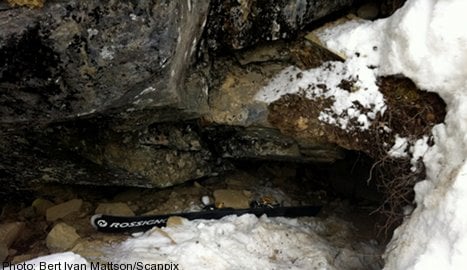 The bear's winter lair stumbled upon by five children in Funäsdalen last week.

Since the accident, Olle, who is still being treated in hospital, has thought a lot about the cubs and hoped that they would be taken care of by authorities. When he heard they had been put down he was bitterly disappointed.

“I think they should have done more to try to save their lives. Of course the mother wasn’t going to come back, all the experts said it was unlikely,” he told the Expressen newspaper.

The bear attacked the boy when he, together with four other friends, disturbed her winter lair while skiing off-piste at the ski resort in Härjedalen.

After the attack, the bear fled into the forest and soon the concern turned to her cubs still in need of their mother’s milk and risking imminent death if she didn’t return.

According to bear expert Lars Svanberg it was surprising that the female bear didn’t return. He told newspaper Svenska Dagbladet Monday that in normal circumstances she would have returned within a few days.

“It depends on how safe she feels and how much human activity there’s been in the area,” he told SvD.

But the mother never returned and around midday Tuesday the local police reached the decision that the cubs were in such a bad state that they had to be put down, despite the offer from an animal park to take them in.

“We didn’t want them to suffer. We examined them and came to the conclusion that it wasn’t appropriate to let them continue,” Andrew Sörensen of the police told news agency TT.

The police had received threats in the past and would therefore not disclose who had final say in the matter but assured Expressen that they were acting on expert advice.

“We are certain that we reached the right decision. There was a mother and we had to put our hopes to her return. We can’t go picking up cubs every time a mother goes missing,” Sörensen told Expressen.

Representatives from Orsa Bear Park were disappointed not to have been allowed to help, but relived that the cubs were no longer suffering.

“It is a pity they did not turn to us for guidance,” Pernilla Thalin told the newspaper.

From his sickbed twelve-year-old Olle was disappointed that not more had been done to save the cubs.

“I don’t see why our lives should be so much more important than the bears’,” he said.