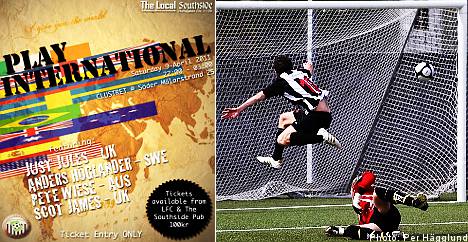 With a members list stretching from the Copacabana to the Black Sea, the club can guarantee an eclectic night to remember on the Clustret dance floor on April 9th. And there’s no need for anyone to feel left out, since the club is inviting the rest of the international community to come along and join in the fun (See bottom of page for details).

Before they pull on their dancing shoes, however, the players from Långholmen’s seven teams will be dusting off their football boots as the last of the ice melts and pre-season training moves back outdoors. For first team captain Andrew O’Sullivan, the season ahead is looking as bright as any in the club’s nine-year history.

“The first team is in excellent shape for the Division 4 campaign, but we also have four other men’s teams and two women’s teams,” says O’Sullivan. “All had great seasons last year and will be aiming to push for promotion again this time round.”

On the men’s side, both reserve teams earned promotion, while the first of two Korpen–or fun league–teams won the Stockholm league. The women, too, excelled, with the Division 5 team coming second and just missing out on promotion, and the Korpen players finishing safely in mid-table.

Players from 24 different countries are currently happy to call Långholmen home, and the inclusive international atmosphere has also attracted growing numbers of Swedes in recent years. But despite its rapid growth, Långholmen remains true to the values forged early in the last decade, when a handful of newly arrived exiles started kicking a ball about on the old prison island in central Stockholm that gives the club its name – a heritage reflected in the club’s black-and-white striped kit.

United by a combination of the English language and a desire to find a niche in their adopted country, the tight-knit team soon joined the league system in Division 8 and quickly embarked on a spectacular journey through the tiers.

On the pitch, the club has become widely respected for its fair play and competitive ethos. Regardless of the results, however, Långholmen is really all about what happens after the final whistle.

“It’s a community in the best sense of the word,” says O’Sullivan. “The football is just the tip of the iceberg – members socialise together, and there’s always someone to call on for a chat, support or some advice on living in Sweden. You could say that it has helped us settle.”

It’s a good-natured club that breeds loyalty among players and fans, and attending home games at the Essinge IP ground is always an entertaining way to spend an afternoon in a friendly environment. But while there are plenty of highs, sombre farewells are also commonplace in any international community, and the club is naturally seeking to boost its membership and support across all teams.

“We’re a welcoming club and we’re also very ambitious,” says O’Sullivan. “But most importantly, playing for Långholmen is an awful lot of fun. We play with a smile on our faces, and with so many teams, everyone can find the level that suits them best.”

What is the name given to the surface on which most football matches are played in the Stockholm leagues?

Please send your answer to [email protected] by 1800 CET on April 4th. A prize draw will be made, and five people with the correct answer will be contacted with details on how to pick up their tickets.