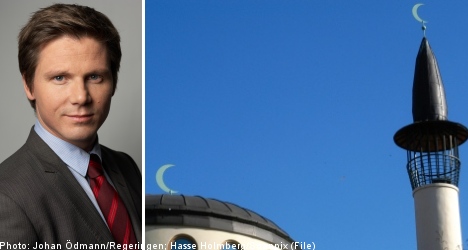 The government is to task the state-run Living History Forum (Forum för levande historia) with preparing a report on the issue by August 19th. The public agency will compile all relevant data and examine the possible causes of Islamophobia and anti-Semitism in Sweden.

Integration minister Erik Ullenhag, from the centre-right Liberal Party (Folkpartiet), told newspaper Dagens Nyheter that upgrading the status of history as a school subject was one possible step that could be taken to arrest the development of religious prejudices in the country.

“Anti-Semitism and Islamophobia are particularly serious, since they are forms of ideologized hatred,” Ullenhag told The Local.

The minister said he had noted a tendency in the Swedish debate whereby both Jews and Muslims in Sweden were held collectively accountable for matters over which they had no control.

“Jews in Sweden are held accountable for what the Israeli government does, and the Muslim group has been met with suspicion ever since the 11th of September as potential terrorists,” said Ullenhag.

“What worries me an awful lot is that, in my conversations (with both groups), I’m receiving signals that both Jews and Muslims are testifying to being the subject of harassment for wearing religious symbols, and some are choosing for that reason not to wear religious symbols.”

Ullenhag met with representatives from the Swedish Muslim community in January in an attempt to develop a strategy for combating Islamophobia in the wake of a suicide bombing that terrified Christmas shoppers and left the attacker dead.

Ullenhag admitted to having been deeply concerned about a potential anti-Muslim backlash in the weeks after Taimour Abdulwahab blew himself up in central Stockholm.

”I think we’ve managed to handle the debate the right way,” said Ullenhag.

“We shouldn’t be naive to the fact that violent Islamic terrorism exists in Sweden, and we will clearly resist that, but we also have to be able to show that the 400,000 or so people with backgrounds in Muslim countries, many of them practising, are not collectively responsible for the actions of a lone terrorist.”

He added, however, that it was still “a little too early to say” whether life for Muslims in Sweden had become more difficult since the attack near one the city’s busiest shopping streets.

The situation for Jews in Sweden has become more precarious in recent times, particularly in the southern city of Malmö.

The Simon Wiesenthal Center, a US-based Jewish rights group, has criticized Sweden for not doing enough to protect the Jewish community in the city.

Ullenhag links the rise in the number of attacks on Jews to events two years ago, when the city decided to hold a Davis Cup tennis match behind closed doors, and thousands protested against Israel’s participation.

“I think the recent debate in Malmö, and in particular the discussion a couple of years ago surrounding the tennis match between Sweden and Israel, created a considerably tougher climate. There we had a situation where criticism of Israel’s government developed into the downright harassment of Jews as a group.”

Ullenhag stressed that an upsurge in anti-Semitism and Islamophopia ran counter to longer term trends showing a broadly more welcoming approach to immigrants in Sweden.

“What we know in general – and we know too little, that’s why we’re commissioning this report – is that we have become more tolerant in Sweden towards immigration and immigrants over the last 20 years,” said the minister.

“But it seems we have seen a rise in prejudice, and sometimes pure xenophobia, towards certain groups, and those are Jews, Muslims, and also Roma.”

Ullenhag said anti-Roma sentiment, which is being examined in a separate White Paper, did not have the same ideological basis as anti-Semitism and Islamophobia.

“Both have an ideologized hatred at their foundation, characterized by notions of world domination and a host of conspiracy theories.”

Ullenhag said these shared characteristics made the problems particularly serious and explained why the government wanted to examine them together.