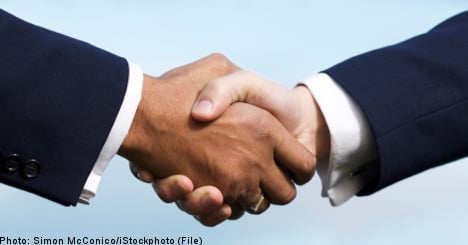 It will come as little surprise to many that starting up your own business in Sweden is not the most straightforward of matters.

However, if you have a burning entrepreneurial spirit, a good idea, or simply a will to try out something new, the good news is that there is plenty of support available, no matter how good or bad your Swedish may be.

The process can be long and too time consuming to deal with in its entirety here, but if you just want the basics, read on.

You will certainly not be alone. Some 20 percent of new businesses in Sweden are started by foreigners, while younger immigrants (18-24) are twice as likely as their Sweden born counterparts to start their own businesses.

Despite the challenges of Swedish bureaucracy, the country has nevertheless developed a climate to encourage entrepreneurs as well as need for it.

A 2008 report commissioned by the Swedish Agency for Economic and Regional Growth (Tillväxtverket) found that the most important factor for immigrants in starting a business is the chance to work independently.

The report also found that a major difference between those born in and outside Sweden is a greater fear of unemployment among foreigners than native Swedes.

Another place to turn to for specific help as an immigrant looking to start out on your own, is IFS (Internationella Företagarföreningen i Sverige) which was formed in the 1990s specifically to help out foreigners looking to launch their own companies

Figures from 2008 show that despite the hurdles, there are plenty of foreigners who are still wailing to give it a go.

Roughly 7,7000 companies were started by people born outside of Sweden in that year alone and there are currently some 75,000 in total.

In addition to commissioning studies, Tillväxtverket is another great resource for prospective entrepreneurs. Set up by the government to achieve more enterprises, growing enterprises and sustainable, competitive business and industry throughout Sweden it helps female entrepreneurs, foreigners and other groups.

A recent study carried out by the agency looked at attitudes among foreigners about starting their own companies and in an effort to try and create better conditions for them to do so and grow.

“We did this to try and lessen the difficulties that these people encounter as well as highlighting their potential for the Swedish business market,” the agency’s Vukica Bosnjak explains.

“Entrepreneurs with foreign backgrounds increase business and help improve the relationships between Sweden and other countries.”

She added that one of the biggest problems for expats hoping to start their own companies seems to be raising finance.

“The problem is making contact with finance people or organisations. Foreigners are more than twice as likely to have applications for a loan or credit turned down compared with those born in Sweden,” says Bosnjak.”

This can be for many reasons, she adds. Among them are the cultural and language barriers, or a lack of references and financial background details. Another factor can be the proposed financier not being familiar with the business area, while another can be a general lack of cooperation.

In an attempt to help immigrant entrepreneurs overcome such issues, Tillväxtverket has produced a couple of online games for prospective enterprises, which clarify the ways to tackle the financing issues.

The first “Kulturbanken” aims to help your preparations before a bank meetings and the cultural issues which can have an effect, while the other, “Finansieringspelet” (the Financing Game) gives advice on the kind of questions that will be raised during a bank interview and how to answer them.

And while many frustrated job seekers who have set their sights on starting a business may loathe the idea, there is actually a fair amount of useful information available at the local branch of the Swedish Public Employment Service (Arbetsförmedlingen).

You may be surprised to learn, especially if you have been made redundant, what you are actually entitled to in terms of support for starting a business. There will also be advice on filling in forms correctly and the opportunities for joining a union, if you are not in one already.

It is worth making sure that if you have been unemployed, that you enquire about government grants to help with new start-ups, and check out all relevant sources for unemployment insurance (even those running their own business are eligible).

Another important consideration in starting a business is deciding what company kind of company it is going to be. This falls into five categories – sole trader business (enskilda firma), trading partnership (handelsbolag), limited partnership (kommanditbolag), limited company (aktiebolag), or economic association (intresseförening).

As a sole trader you are responsible for the business in terms of owning and running it and supplying customers, but finance must be kept separate from your own personal accounts.

A trading partnership as the name suggests, can be owned and operated by more than one person with joint liability as agreed by all participants.

A limited partnership meanwhile is similar, the main difference being that it has at least one general partner who is responsible for all debts incurred by the company.

If you decide to run a limited company you will need to commit a minimum share capital of at least 50,000 kronor ($7,800). This in turn means that you risk losing your investment if the company goes bankrupt, although in most cases the people who start the company are on the board of directors, so they will have a joint and personal motivation to make it succeed.

An economic association is formed by a minimum of three people with each member having a voting right at general meetings. As in the case of a limited company, it must be registered with the Swedish Companies Registration Office, which is also where you will need to register your company’s name for copyright reasons.

Once you are fully registered you will be provided with an F- or FA- tax certificate, which is useful to put on all invoices, especially as a new starter.

Which leads us nicely into the word of tax returns. An F-tax certificate means you are responsible for all tax and social security contributions, while if you are a sole trader running a business while still being paid by another employer you will need an FA-certificate.

It is crucial once you are registered, that you are punctual with your tax returns. It will come as little surprise that there are stiff punishments in Sweden for failing to file on time.

There is also a great deal of information on the Swedish Tax Agency (Skatteverket) website explaining more about the different types of companies and the associated tax obligations.

So you’ve got your idea, you’ve done the business plan, you know what type of company it will be and negotiated your way through what is rarely a pain-free straightforward registration process…now all you need to do is find some customers or clients, market your business, make sure you keep detailed and up to date records of all transactions, and probably discover you are working harder than you ever did before with the supposed aim of “more freedom”.

One final piece of advice – in a bureaucracy-friendly foreign country like Sweden it is no coincidence that many expats who run their own businesses employ the services of an accountant, at least once a year. This may turn out to be the best investment of all in your new enterprise.