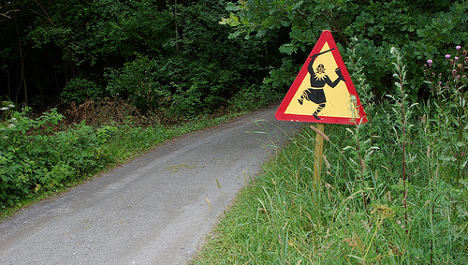 The primitive group are thought to have fled from the tsunami wave of feminism which gripped Sweden in the 1960s, rolling unabated into modern times.

“Many people associate the 1960s with a spirit of free love and alternative lifestyles, but we just found the crushing orthodoxy of feminism and left wing political correctness to be suffocating,” Tor Sten of the group which goes by the name “the Vikings were right”, told The Local on Friday.

While the community has lived in almost total isolation since 1962, Sten said that villagers were not overly concerned that their secret had now been revealed.

“When the outsiders stumbled upon our hamlet, they were able to persuade us that feminism is simply the radical notion that women are human beings too – this sounded very reasonable and so we have decided to embrace the new creed.”

The small community originally consisted of around 12 families when they began their long trek north into the area of Sweden inhabited by the indigenous Sami peoples.

Finding themselves unable to communicate with the locals they pushed on into the wilderness and established an insular community in the suburbs of society, content to be left in peace with their traditions and 1950s ways.

“We wanted to maintain the spirit of the ‘Folkhemmet’ which we felt was being eroded by the media establishment and the Stockholm urban elites,” Sten said, referring to the political concept that played an important role in the development of the Swedish welfare state.

In the course of time though, members of the community became curious on hearing stories from their forefathers, and some went on forays out into Swedish society, finding that they actually liked some of the things they experienced.

“I mean, liking pizza doesn’t make you a fanatic, does it?” Sten said.

But while Tor Sten protested that the community takes contact with the broader Swedish society in its stride, anthropologists have been rendered fascinated by the discovery of the peace-loving backward “Vikings”.

“Most people know the Vikings as a bunch of raping and pillaging rogues, but these people have no desire to move anywhere. Furthermore, they may have started off in the 1950s, but there is plenty of evidence to indicate that now they live more like we did at the turn of the last century,” said one expert who preferred to remain nameless for fear of reprisals in the blogosphere.

The expert continued to observe that it is not just their habits that appear backward to the average Swede, but also their attitudes to anything modern.

“Any ideas or changes since the early 1960s appear to have passed them by. For example, they even still seem to believe that gender roles among children are determined by biology.”

Academics from around the country, from geneticists to social historians, are reported to be clamouring for access to the community, whose idiosyncratic behaviour is provoking much debate.

“They are a highly competitive society, with games of strength and endurance the main pastimes. The males are very dominant and much emphasis is placed on the importance of ‘saying what other people are thinking’,” social historian Roberta Sjuklövertramp told The Local.

Tor Sten and the “Vikings” have meanwhile decided that while the revolution will not be televised, resistance is futile, and have opted to embrace the greater openness that contact with the outside world entails, despite the risks involved.

“As long as they share our values and beliefs, all can take an interest in our group,” he said.

On hearing that one last pocket of resistance to the feminist cause had been persuaded by the strength of the arguments, Feminist Conclusion leader Gunnar-Jane Transdotter was elated.

“It was just a question of time really, we can’t be beaten. The future is ours,” she said.

It’s midday in Sweden and custom dictates that we now reveal our chicanery, skulduggery and general tomfoolery.

Sarek is a an area of wilderness in northern Sweden.

The Sami are an indigenous people living predominantly in northern Sweden.

The 1960s is an era widely associated with a spirit of free love and alternative lifestyles.

Comments have now been reactivated. A word of caution – after midday the joke’s on you.