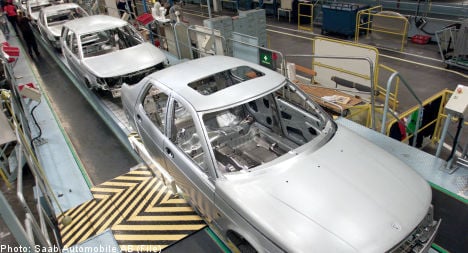 “At 9am we received the outstanding money in our account and IAC has resumed production and delivery to Saab,” Marcus Nyman of the Swedish division of International Automative Components (IAC) told the TT news agency via email on Friday morning.

On Thursday, IAC announced it had halted deliveries because the automaker had failed to make payment on a number of invoices.

“We unfortunately had to suspend our deliveries to Saab until further notice because of unpaid invoices,” Marcus Nyman of the Swedish division of International Automative Components (IAC) told AFP.

“The amount is significant and we have to protect our own creditors,” he added, explaining that IAC, which supplies components to Saab, had had the carmaker as a client for decades.

“We have no liquidity problems. What is happening right now are discussions between us and suppliers. There are always two sides in negotiations,” he told the TT news agency.

IAC’s announcement is the latest in a series of setbacks for the loss-making Swedish brand.

On Tuesday and Wednesday, Saab was forced to suspend production temporarily as suppliers halted the delivery of certain parts because of unpaid invoices.

On Friday, Saab spokesperson Gunilla Gustavs told TT that production was set to start again at the company’s plant in Trollhättan again “as soon as the material is in place”.

Saab’s owner Spyker said production resumed Wednesday morning at the factory in Trollhättan, in southwest Sweden, and insisted that Saab “has sufficient means to meet its immediate liquidity needs.”

Last week, the brand’s chief executive Jan-Åke Jonsson said he would be leaving in May as Spyker announced heavy losses for 2010.

Russian businessman Vladimir Antonov — who has since Saab’s sale said he wanted to help finance the brand but was forced out amid allegations of ties to organised crime — said Wednesday he had put in a request to the Swedish National Debt Office to take a stake in Saab.

The authority, which has a say in ownership changes because it guaranteed a European Investment Bank (EIB) loan to Saab, said it would give its answer in a few weeks.

On Thursday, the office said Saab had asked for a new installment of its loan, which would also be guaranteed.

Saab has “received up to now €217 million ($307 million) from the EIB and we have guaranteed up to €400 million so we have no reason to oppose” the installment,” spokeswoman Marja Lång said.