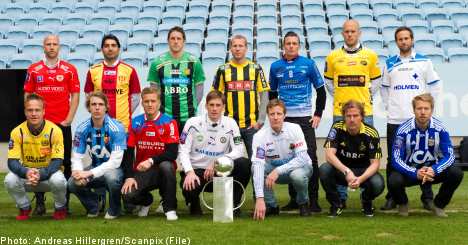 Last year’s Allsvenskan season ended with Malmö FF claiming its 16th title after a late season surge that led to a thrilling title race with Helsingborg.

Sweden’s premier football division kicks off competition once again on Saturday in what promises to be yet another exciting and unpredictable season.

In the past twelve seasons, nine different teams have won the Allsvenskan SM Guld, in what is one of the most open and unpredictable leagues in Europe. This year is no different with up to five teams well and truly capable of challenging for the title.

The obvious favourites will be reigning champions Malmö FF, which looked unbeatable towards the end of last season as they clinched the title. Talented youngsters such as Ivo Pekalski, Guillermo Molins, Jimmy Durmaz, Jiloan Hamad, Daniel Larsson and Agon Mehmeti, combined well with veterans Daniel Andersson and Wilton Figueiredo, and having kept the squad together, Malmö will continue to be a formidable side.

However, in the past 14 seasons, only one team (Djurgården in 2003) has managed to defend its title. Malmö’s emerging young stars will attract a lot of attention during the summer transfer window, while manager Roland Nilsson is also been linked to the soon-to-be-vacant job at FC Copenhagen. Like so many teams before them, it could all come crashing down very quickly.

Elfsborg has consistently finished in the top four over the past five years, and having significantly bolstered its squad with the signings of David Elm and Lasse Nilsson, the team will most likely be amongst the top four again. However, Elfsborg is fast becoming the Arsenal of Swedish football: great squad on paper, great to watch, but with a tendency to dominate games without scoring goals. Last season it recorded an incredible 11 draws, and that could cost the squad another title.

Helsingborg, which led the Allsvenskan most of last season, remains one of the stronger sides in the competition, despite losing Marcus Lantz and Joel Ekstrand, and is capable of mounting another title challenge. IFK Göteborg was a favourite this time last year, boasting one of the best squads in the league, but was plagued by incredible inconsistency all season. At its peak Göteborg could beat anyone, including a 5-1 hammering of Elfsborg. But at its lowest, the team couldn’t even muster a draw against bottom-placed Åtvidaberg.

And finally, the outside chance will be Örebro SK, which over the past few seasons has progressively built up an impressive squad. While never spectacular, they are consistent, effective and get results – making it the sort of team that generally ends up winning the league.

Most pundits have already earmarked Gais and Gelfe for relegation, and deservedly so, considering how badly both played last season. Gais can at least be optimistic about the possible return of Wanderson do Carmo, but if the move doesn’t eventuate then it will have to hope and pray that Alvaro Santos recovers some of his prolific goal scoring form from his days at Helsingborg.

For Gelfe this is going to be a long year. The team barely survived last season, and has made no additions to the squad over the winter to suggest it will do any better.

Like any newly promoted side, IFK Norrköping and Syrianska will be looking for survival. IFK Norrköping may have a long history in the top flight but the current squad is still very much the makings of a side more fit for Sweden’s second tier league, the Superettan. Syrianska by contrast, is playing in the Allsvenskan for the very first time and as recently as 2005, was playing in Division Two (fourth tier). With the likes of Peter Ijeh, Sharbel Touma and Johan Arneng, the squad has some seasoned top-flight performers, and even if they are on the wrong side of 30, Syrianska is certainly good enough to stay in the top Swedish league.

Between the title contenders and the relegation battlers, there are a host of clubs who could end up doing just about anything. The best example is Halmstad. New Spanish manager Josep Clotet Ruiz, who was instrumental as Malmö’s offensive game plan last season as their assistant coach, has added a very Spanish ambience to the club this year. He has, among other things, signed three youth players on loan from Real Madrid – a club which rarely finds itself needing to deal with small provincial Swedish sides.

Halmstad could take the league by storm through Barcelonaesque “tika-taka” football…or the club could get relegated with their Spanish imports struggling to adapt to Swedish food and playing on cold nights in Borås.

Trelleborg were last year’s quiet achievers, recovering from a poor start that saw them win only one game in their first ten, to gradually move up the table into fifth place through a series of unspectacular 1-0 wins. Manager Tom Prahl has a great track record of making the most of meagre resources, having previously won two titles with Halmstad and qualifying for Europe with Trelleborg in the early 1990s. If they can carry over their form from the second half of last season, there is every chance he’ll take Trelleborg to Europe again.

Kalmar are not anywhere near as strong as the squad who won the title in 2008, but they still have a few talented Brazilians left on their books. This year they’ll have the added impetus of playing in their brand new stadium. This also means they’ll no longer have to play European fixtures on the other side of the country…only problem is that this year they no longer have any European fixtures.

AIK had a horrible season in 2010 and was more concerned about avoiding relegation, let alone defending its title. But there were signs of recovery by season’s end. Mohamed Bangura has already proved to be an astute signing, who many tip to be one of the league’s best players. Djurgården hovered above the relegation zone for most of last season, before finding some form in August that pushed it into safety. Another season of mid-table mediocrity seems likely.

Häcken continues to build a squad around journeymen and discards from other clubs, this year recruiting Dioh Williams. But so far the formula has worked, keeping them in the top division. Mjällby defied all expectations last season, playing a brand of attacking football rarely seen in newly promoted sides. They’ve managed to keep most of the squad together, including Dutch forward Moestafa El Kabir, so there is every reason for them finish in the top half again.

Making preseason predictions for the Allsvenskan isn’t easy, and I’m sure it won’t be long into the new season before one of the sixteen clubs makes a mockery of my punditry skills. But the egalitarian nature of Swedish football makes it incredibly difficult to predict.

I’m still convinced that most clubs recruit players on chance and pot-luck rather than extensive scouting and careful assessment, meaning a club could uncover the next Zlatan Ibrahimovic or Afonso Alves…or just as easily get stuck with a Ali Dia.

This time last year Alexander Gerndt was struggling to hold onto a first team spot at Gelfe. By season’s end he was the competition’s leading scorer and the hottest property in Swedish domestic football. The summer transfer window also complicates things, as strong performing sides tend to have their squads pillaged by richer clubs on the continent, usually from Holland.

So the short answer is that just about anything could happen this season, and probably will. Inevitable my predictions will be proven to be horribly wrong, but I’m going to enjoy finding out.