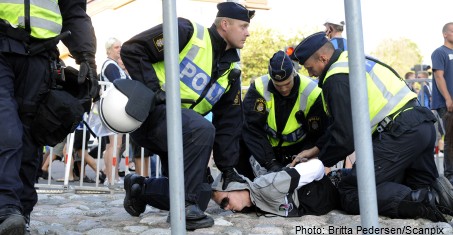 Swedish Police write on their website that they are producing new education material so police officers working matches can better judge situations and more easily report potentially risky fans to be blocked from entering sports arenas.

Sweden’s no trespassing law was tightened in 2009, allowing police authorities to use the law to report risky fans.

Now, Swedish police have evaluated the changes to the law and found that 167 no trespassing cases were sent to the prosecutor in 2010, a marginal increase from 2009.

In a statement on the Swedish Police website, Petter Nilsson, Police Commissioner for the National Police Board (Rikspolisstyrelsen) said: “When Malmö met Helsingborg in a Skåne derby last fall there were 330 police officers there. Compare that with five or six support police officers who are busy with other tasks. We want to make it clear that all police officers are able to report on the no trespassing law.”

He continues: “Police officers obviously shouldn’t go overboard but they at least shouldn’t avoid reporting out of fear of not knowing how the law works.”

The education material will be available on the Swedish Police’s intranet during the next week.