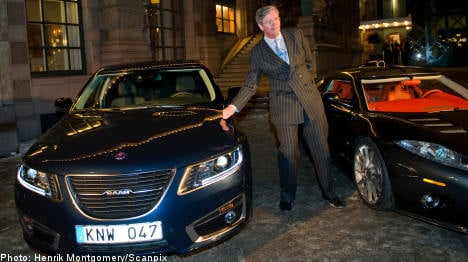 “Saab is not on the verge of collapse,” Muller told reporters at a presentation of new Saab models in the Stockholm suburb of Nacka, calling media reports about Saab’s financial problems “disproportionate.”

Saab — which Spyker rescued at the last minute in January 2010 by buying it from US auto giant General Motors — was forced to stop production three times last week as some suppliers halted deliveries over unpaid bills.

The production stops were only “a small glitch” said Muller, quoted by Dow Jones Newswires.

He also said he regretted setting out sales targets for Saab after purchasing the iconic brand for $400 million, saying it was now getting “hammered” by the press for not meeting its objectives.

month he would be stepping down in May, meanwhile stressed he saw “the

Russian businessman Vladimir Antonov — a former Spyker shareholder who GM has prevented from taking a stake in Saab — put in a request to Sweden’s National Debt Office last week to invest in the carmaker.

The authority, which has a say in ownership changes because it guaranteed a European Investment Bank (EIB) loan to Saab, said it would give its answer in a few weeks.

Antonov has said he was ready to invest €50 million ($70 million) in Saab and wants to take a 30 percent stake in the company.

Over the same period that Muller’s remuneration more than doubled, Saab recorded losses of around 1.95 billion kronor.