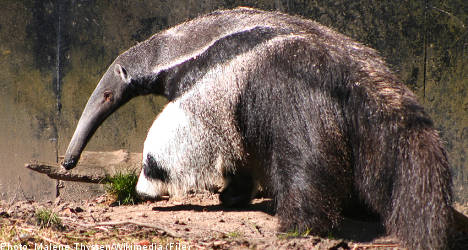 “It is not as dramatic as it sounds. The anteater panicked when the birds cackled and flapped their wings and it struck back,” Helena Olsson at the Parken Zoo told The Local on Tuesday.

“The anteater is not a meat-eater, unless you consider ants meat, but when it feels threatened, it will defend itself,” she said.

Olsson said that the South American animal, whose claws she said are strong enough to damage concrete, became curious and managed to pull apart the fence separating their pens and enter the enclosure holding the long-legged birds.

“The birds are very frail and the anteater is very strong,” she said.

Zoo wardens reacted swiftly to the commotion to put a halt to the one-sided slaughter, Helena Olsson said, furthermore confirming that the fence has been repaired in a bid to avert a repeat.

Aside from the ten fatalities a further five birds were injured in the incident but they are expected to make a full recovery.

Parken Zoo keeps a pair of anteaters, described on the zoo’s homepage as “like no other” with its “60 centimetre long tongue, big claws, shaggy coat and bushy tail”.