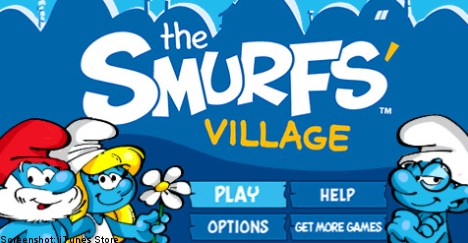 Before realising what had happened, the brothers had racked up more than 50,000 kronor ($7,800) in charges.

“I downloaded the Smurf game for each of them from the Appstore. It cost seven kronor. Maybe I didn’t read the terms and conditions carefully enough, but I didn’t think it would cost more than that,” parent Maria Attvik told the TT news agency.

Attvik downloaded the Smurf Village game for her two sons before a family road trip from Stockholm to Gothenburg.

The game involves feeding and watering strawberries to make them grow. But what Attvik didn’t know was that once they were playing the game, the kids could also make purchases without being asked for a password, Sveriges Radio (SR) reported.

Among items the kids were able to purchase as a part of the Smurfs’ Village game were wheelbarrows containing virtual strawberries costing 749 kronor apiece.

As the kids busied themselves with their playing during the car ride, the Attvik’s didn’t notice anything out of the ordinary.

But after a time a flood of payment messages started to flow in from Apple’s iTunes Store.

By the time the parents took a closer look, one son had managed to accumulate charges of 11,000 kronor, while the other’s charges came to a whopping 40,000 kronor.

“It feels like they are just out to trick you,” Attvik said of the game.

She has now contacted Apple in an effort to get her money back, but so far her requests have gone unanswered.

Smurfs’ Village, which is sold by US-based Capcom, has also been criticised in the United States.

The game is ranked seventh among iStore apps which have generated the most income.

According to its description in Smurfs’ Village is “free to play, but charges real money for additional in-app content”.

It’s also possible to lock out the purchasing function by adjusting the settings.

According to the description, users are also supposed to be required to enter a password every fifteen minutes to approve purchases.