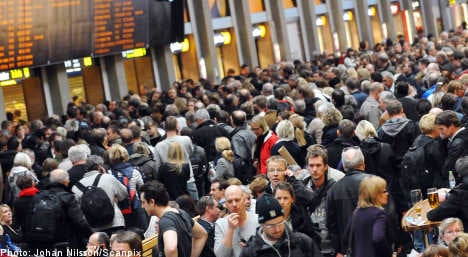 Trains traveling north from Stockholm’s Central Station couldn’t move after a blown down pole knocked out power around 4pm and was left blocking five northbound tracks.

“It’s total chaos here. It’s packed like a can of sardines at Central Station,” TT reporter Jan Winter said at around 7pm.

The pole which blew down was part of a provisional structure holding overhead lines up across a number of tracks.

According to the Swedish Transport Administration (Trafikverket), Thursday’s stormy winds blew down two such structures between Karlberg and Solna north of Stockholm, stopping all trains to and from Stockholm which would normally use the northbound tracks.

Later on Thursday night, the agency announced that one northbound track from Stockholm was set to open around 11pm, but the report turned out to be premature.

“The track is too close to the pole that fell over all of them,” Transport Administration spokesperson Monica Näslund told TT.

Certain postal trains will nevertheless be able to leave from the main postal rail terminal at Tomteboda during the night.

The transit agency continued to work feverishly in the area which caused the stoppage.

“Mobile cranes are on the scene and are going to remove the two [structures] that fell over and prop up the third so that it doesn’t fall,” said Näslund.

The work is expected to continue throughout the night, but the agency nevertheless expects work to be completed before the morning rush hour.

However, the Transport Administration is urging travelers to check if their trains are on scheduled since the repair timetable remains uncertain.

Shortly after 11pm, national rail operator SJ announced that night trains to Jämtland, Luleå and Umeå in northern Sweden would depart from Central Station and travel via the postal rail yard.

The X2000 train towards Sundsvall was also expected to depart in the early hours of Friday morning.

The power outage turned the main hall at Stockholm’s Central Station into sea of weary and frustrated travelers, many of whom were left wondering exactly what had happened and when the problem may be fixed.

The situation was made even more chaotic after the station’s public address system failed, as did those all at stations throughout the Lake Mälären region.

SJ did its best to round up buses to take stranded passengers to their destinations.

“But as it stands now, we can’t get any buses,” SJ spokesperson Dan Olofsson told TT around 8pm on Thursday night.

Swedish meteorological agency SMHI had issued a class 2 warning earlier on Thursday due to strong winds.

In Skåne in southern Sweden, wind gusts were measured which topped 100 kilometres per hour.

The winds downed trees and scaffolding in many areas, and ripped the roof of a garage in Nacka south of Stockholm.

The storm knocked out power to nearly 40,000 households throughout southern Sweden, but by 9.30pm, the number of households without electricity had sunk to 25,000.

“Things have started to go in the right direction, but it’s blowing really hard in some areas. We can’t work everywhere – it’s too dangerous,” Roger Lindmark, a spokesperson for power company Vattenfall, told TT.

“Tree branches are blowing down on our workers.”

Due to the continued strong winds, Lindmark was unable to say exactly when all of Vattenfall’s customers would have their power back on.