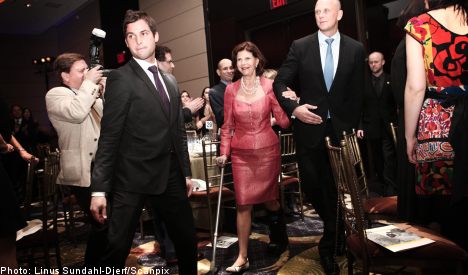 The encounter took place in connection with a visit by the Queen and Princess Madeleine to a store in New York, according to the Royal Court.

In a statement, the Royal Court said “the photographer didn’t acknowledge their wish not to be photographed, but instead remained in the entryway of the store. The Queen felt the photographer was being obstinate and chose to go out through the store’s side door. The Queen walked briskly to a parked car in order to avoid the photographer who ran after her. Unfortunately, the Queen then fell, injuring both her foot and wrist.”

“It’s not a question of her simply wanting to avoid being photographed. It’s more akin to stalking,” Royal Court spokesperson Bertil Ternert told the Expressen newspaper after the incident.

“I view of the situation as a case of harassment [Swedish: ‘ofredande’] according to Swedish law.”

But according to the photographer he did not harass the Queen in any way.

“I was standing at the entrance of the clothes store, in a public place, waiting for the royal party to come out. They, however, chose a side entrance and ran for their cars. In the process, the Queen tripped over a garbage bag and fell,” he wrote on his blog.

The incident has sparked a debate in Swedish media regarding the line between private and public sphere. However, the photographer wants to put the incident behind him and move on.

“I am devastated over what befell the Queen and if my presence there caused her any stress, I apologise,” he wrote on his blog.