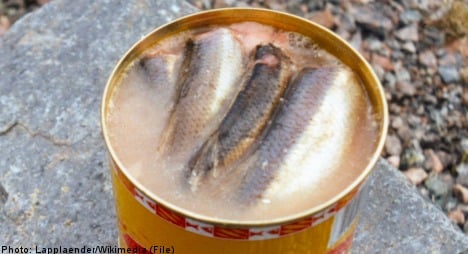 The government decided Friday to continue requesting the special exemption to sell fatty fish from the Baltic Sea in Sweden, despite dioxin levels too high to be sold elsewhere.

Included in the exemption is Baltic herring, which, when fermented, becomes the core ingredient found in one of Sweden’s most beloved (and reviled) culinary offerings – surströmming

The country’s surströmming-aficionados are expected to hail the decision, announced by agricultural minister Eskil Erlandsson during a Friday press conference.

“To me it is important that the tradition to eat Surströmming is safe,” he said at a press conference, although he himself is not a fan of the smelly dish.

Fermented Baltic herring is one of the types of fish that falls under the exemption, in place since 2002, which is set to expire this year.

The EU commission wants to change the rules to only allow fish shorter than 17 centimetres to be exempt, as these contain lower levels of PCB and dioxins.

But the proposed change has led to protests from the fishing industry as it would severely limit supply.

The National Food Administration (Livsmedelsverket) supported a change to the rules, arguing that the high levels of dioxins in fatty fish sold in Sweden today could lead to negative effects for some groups of society.

But according to the government this can be avoided with better information to consumers.

Surströmming is traditionally eaten at the end of the summer and is most popular in some parts of northern Sweden.

The bulging can is a sign of the continued fermentation and the smell that travels when opened is a source of argument with many urban neighbours when the surströmming-season kicks off every year.